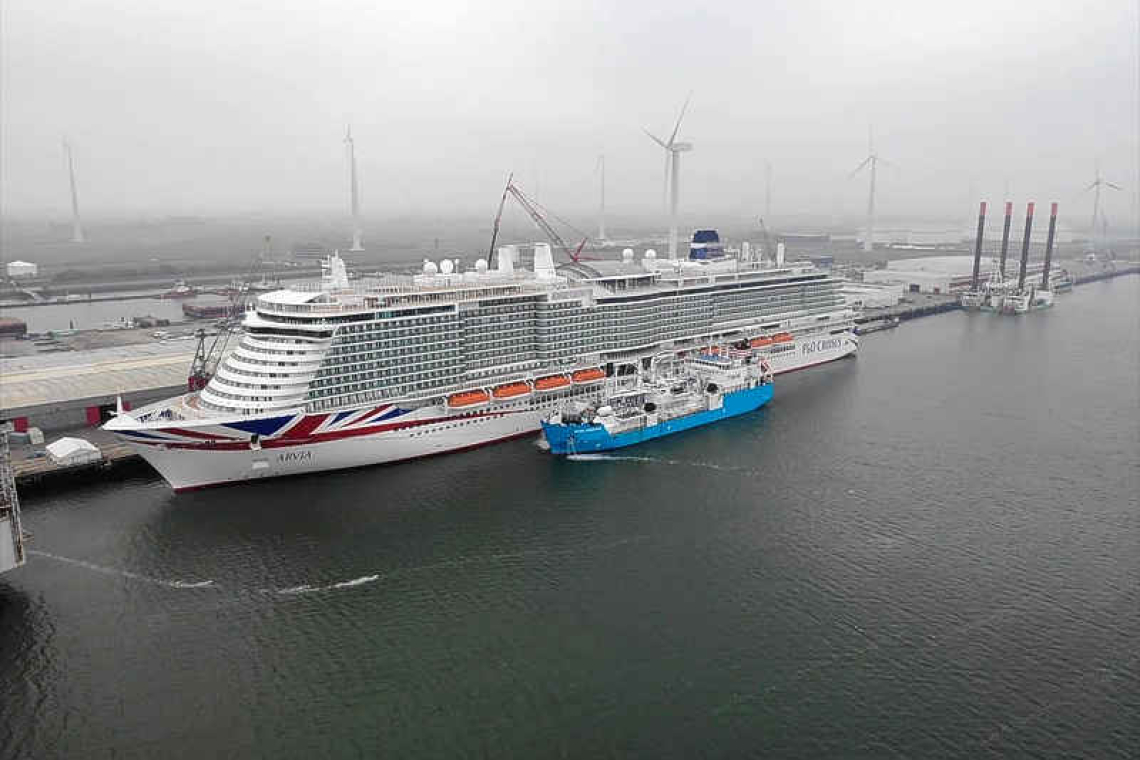 “Arvia”, billed as P&O’s most environmentally-friendly ship, being fuelled with liquified natural gas in Eemshaven in the Netherlands.

PHILIPSBURG–P&O Cruises’ latest cruise vessel Arvia, scheduled for inauguration in Southampton on December 9, will make her maiden call at Port St. Maarten on January 17. This was confirmed by Paul Ludlow, president of the British cruise line that comes under the umbrella of Carnival Corporation & PLC.

Ludlow and his team got acquainted with Acting Minister of Tourism, Economic Affairs, Transport and Telecommunication (TEATT) Omar Ottley at the Government Administration Building on Tuesday. That same day Ottley sent out a press release stating that he had discussed the possibility of a future home-porting agreement with P&O Cruises and that this cruise line “plans to use Port SXM’s terminal as its home, allowing passengers to begin/terminate their cruise locally.”

However, Tourism Minister Charles Fernandez of Antigua and Barbuda, told the Antigua Observer in July 2022 that the government of the two-island nation had been in communication with Carnival UK on home-porting of P&O’s Arvia. After months of negotiations, P&O’s management team was expected to arrive in the country in October to work out the final details of the home-porting deal.

“This means the cruise will start and end in Antigua. Passengers will have to come in by air so there is an obvious benefit already. Taxi operators will make money by transporting them from the airport to the quay. It opens the opportunity for us to benefit in so many areas – in fuel, removal of garbage …,” Fernandez said to the newspaper.

Antigua Cruise Port General Manager Dona Regis-Prosper said on October 21 in an article published on cruisehive.com that the cruise ship Arvia would home-port in Antigua from January to March 2023.

Arvia is one of the world’s largest cruise ships. Built by the German shipbuilding company Meyer Werft, Arvia measures more than 180,000 gross tonnes, is 344.5 metres long, 42 metres wide, has 2,614 cabins for 5,200 passengers and is identical in construction to her sister ship Iona, which was delivered in 2020. Both ships are equipped with the cleanest propulsion system currently available to the shipping industry, a liquefied natural gas (LNG) propulsion system.

Dutch independent fuel supplier Titan concluded the first LNG delivery to cruise ship Arvia last week. The gassing up and LNG bunker operation to the Arvia was executed in Eemshaven in the Netherlands.

Carnival Celebration, delivered at the beginning of the month by Finnish shipbuilder Meyer Turku, is the first in the Carnival fleet to home-port in Miami, where it can be fuelled with LNG.

The government of St. Maarten has not yet made any strategic planning for the installation of an LNG fuelling station in Port St. Maarten. Nevertheless, Ottley said that during the meeting with the management of P&O Cruises on Tuesday, factors were laid out for the possibility of St. Maarten increasing its home-porting footprint in the industry.

“This continues to be a goal for St. Maarten, as its spinoff effects are exponential,” Ottley said. “This relationship with P&O cruises will positively impact and add to our economy of the island. The Tourist Office is planning to increase our awareness in Europe, so it is important to continue to grow our relations now.”

According to P&O Cruises’ promotion, Arvia will offer new and exciting shore experiences. The cruise line has planned many “top-secret” entertainment partnerships and activities for its passengers’ enjoyment. It also offers a “new unique, immersive experience” called Mission Walk, consisting of an altitude skywalk and miniature golf. The ship will feature a sushi and plant-based restaurant.

Ottley said home-porting brings significant economic benefits for St. Maarten, including creating jobs for locals, as the vessel will require support services such as fuel, water, food, merchandise and ground transport, and small business operators will also profit as passengers disembark and go on tours and shop.

“So, we aim to strategically partner with cruise lines to provide that service,” said Ottley, adding that Ludlow had spoken of “the great first impression” St. Maarten had made on him and his team.