Home Local News Police are concerned about shootings against officers 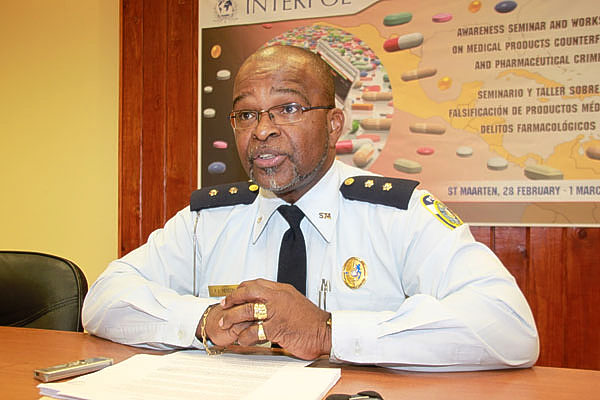 PHILIPSBURG–“Shootings against police officers have not only become more frequent, it has also become extremely radical, with no regard for the lives of others. Luckily, no one was injured during this last incident,” stated police spokesman Chief Inspector Ricardo Henson in a statement on Sunday.

He was referring to the case regarding the shooting at a police patrol by two men on a scooter which took place on Wednesday, March 29. Police management met on this topic last week Thursday. Management has become concerned for the safety of all officers and has been providing additional training for the officers on how to better deal with these types of situations.

“The management team is making it abundantly clear to the community that this criminal act by individuals is totally unacceptable and will definitely cause the officers who are there to maintain law and order, to react likewise to protect themselves and others. The police will not be intimidated, back down, and will not stop and will continue to weed out those criminal elements hiding in our community.

“The management team is also extending sincere gratitude to the Gendarmes on the French side who reacted immediately to assist the police to locate the suspects who had fled to French Quarter on a scooter,” stated Henson.

As a result of their swift actions the police were successful in arresting one of the suspects and confiscating the scooter. This is the great working cooperation the Gendarmes and Police Force have been working on for quite some time by using articles from the Treaty of Concordia. Together, both departments will continue to work to bring this cooperation to the highest level, according to Henson.

In addition, the Police Force encourages the community to continue calling in when they witness a crime or have knowledge of any criminal activity going on.

“Let us come together as partners in the fight against crime. If you do this today, it just might prevent yourself from becoming a victim tomorrow. Fighting crime is not only a police problem; it is also a community problem. The Police Force is therefore asking the community to get on board with them. You never know when crime will come and knock at your door. A simple anonymous phone call to the police tip line may save your life, the life of a family member or any other person,” said Henson.