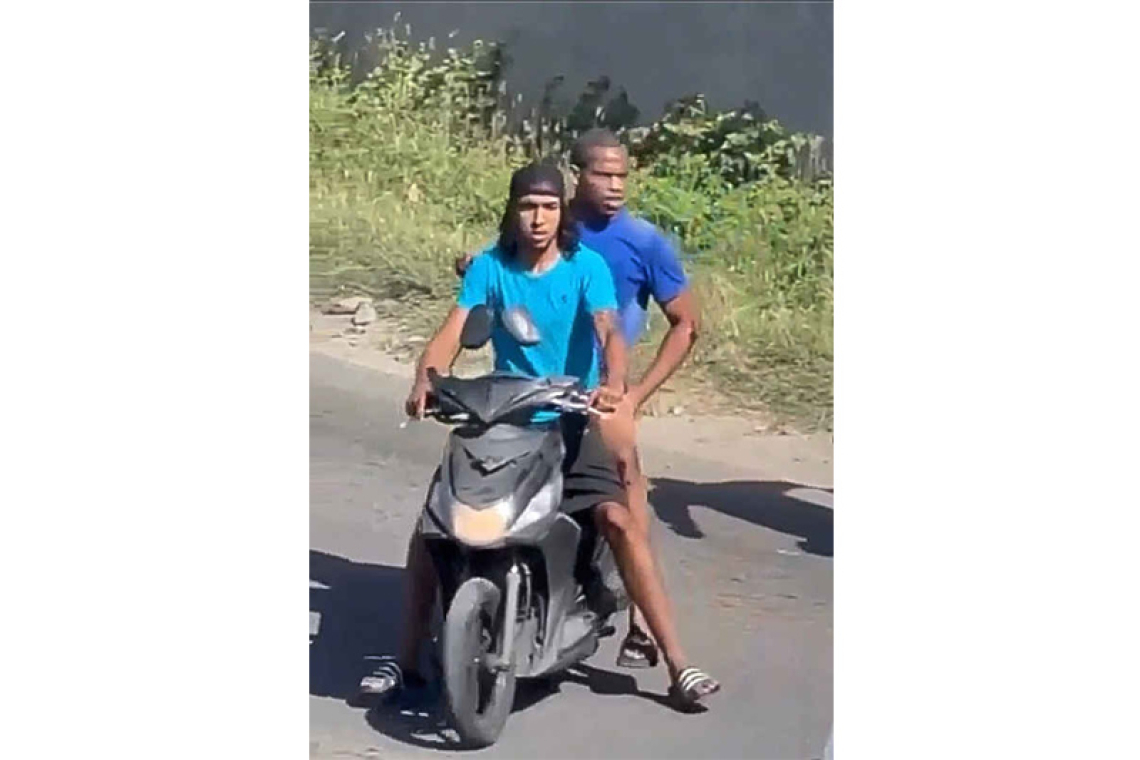 The St. Maarten Police Force is calling on the public to help identify a scooter rider and his passenger who were caught on camera assaulting a fellow road-user on Union Road in Cole Bay. In photo: A still from the video showing the two suspects.

PHILIPSBURG–The St. Maarten Police Force KPSM is calling on the public to help identify a scooter rider and his passenger who were caught on camera assaulting a fellow road-user on Union Road in Cole Bay.

The video of the attack has been widely circulated via social media and messaging apps. Police appeal to the public to help identify these two individuals by giving information that can lead to their arrests.

“The level of road rage displayed in the video is troubling,” police said. “It should also be worrisome to the community. This kind of behaviour should not be condoned, covered up or allowed to further fester in the community.”

Police stressed that “this very un-St. Maarten-like behaviour is destructive to this island’s image as the Friendly Island.”

The community should also be cognizant that this now viral video showing the type of behaviour as seen in this latest video and others prior to it also have an economic impact, police noted. “St. Maarten can easily go from being known as a friendly, safe place to one where visitors could opt not to visit due to the way residents are perceived to treat each other.”

This warning comes as the KPSM Traffic Department has noted an uptick in road rage, reckless driving, and disruptive behaviour on the roads. “These behaviours are more and more displayed by scooter riders and vehicle drivers, to the extreme of physical attacks for simple road incidents.”

KPSM strongly warns and discourages reckless behaviour in traffic, as this can only cause accidents and possible injuries to others on the road. The Traffic Department will intensify traffic controls to curb irresponsible and dangerous behaviour on the road. Anyone caught will face the legal consequences of their actions, police warned.

Persons with any information about the latest road rage and assault incident or any others are encouraged to call the Police Force on tel. +1-721-542-2222, tip line 9300 or emergency 911.