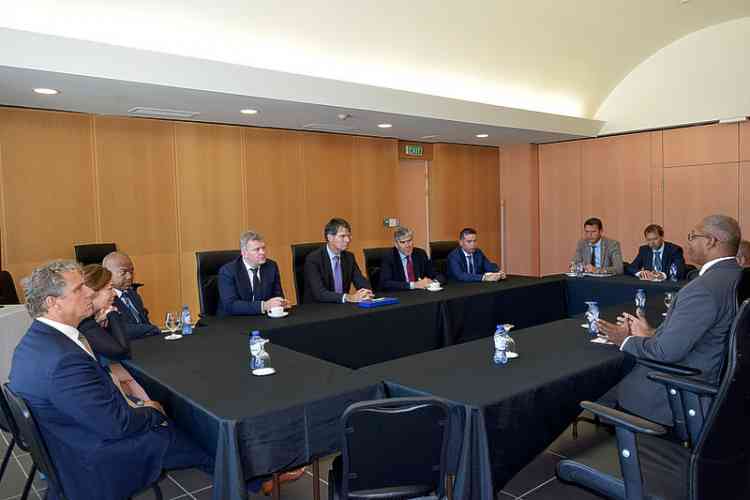 PHILIPSBURG–The Chief of Police of the Netherlands Erik Akerboom and his delegation, representatives of Justice and Safety V&J, the Chief of the BES-Islands (Bonaire, St. Eustatius and Saba) Police KPCN Jose Rosales, and Chief of the Aruba Police KPA Andrew Hoo were in St. Maarten last week Friday and Saturday for a working visit with the Police Force of St. Maarten KPSM headed by Police Chief Commissioner Carl John.

“Twinning is winning” was the theme for this work visit. Local officers are twinned with officers from the Netherlands and it has shown to be very effective, according to police on Monday. The officers learn from each other and assist each other in many forms. Everything they do is done together as a team.

The request from Chief John during the meeting was to have the Dutch contingent remain on the island until KPSM is strong enough to do it all alone. This visit consisted of a presentation by John at the police headquarters in Philipsburg to the other police commissioners regarding the rebuilding of St. Maarten as a country in the aftermath of Hurricanes Irma and Maria, and the rebuilding of the police force.

The presentation also included an explanation by John that safety and security on the island could be restored and maintained thanks to the immediate response of all the countries within the Kingdom of the Netherlands after the passing of the hurricanes.

Gratitude was also expressed to the Netherlands, represented by Akerboom, which provided the island with necessary assistance in the form of equipment, manpower and training to help KPSM give the necessary service to the country.

Akerboom and his delegation also met with members of the Dutch contingent that is presently assisting KPSM with manpower and with the rebuilding of the organisation. After the meeting, Akerboom met briefly with Minister of Justice Cornelius De Weever in the conference room of the Government Administration Building.

The entire delegation was given a tour of the ongoing construction of the new emergency dispatch, soon to be in operation, the cruise facilities and the Simpson Bay police station on Saturday before leaving on their flight in the afternoon.

Police deemed the working visit very successful and all commissioners look forward to their next official meeting.