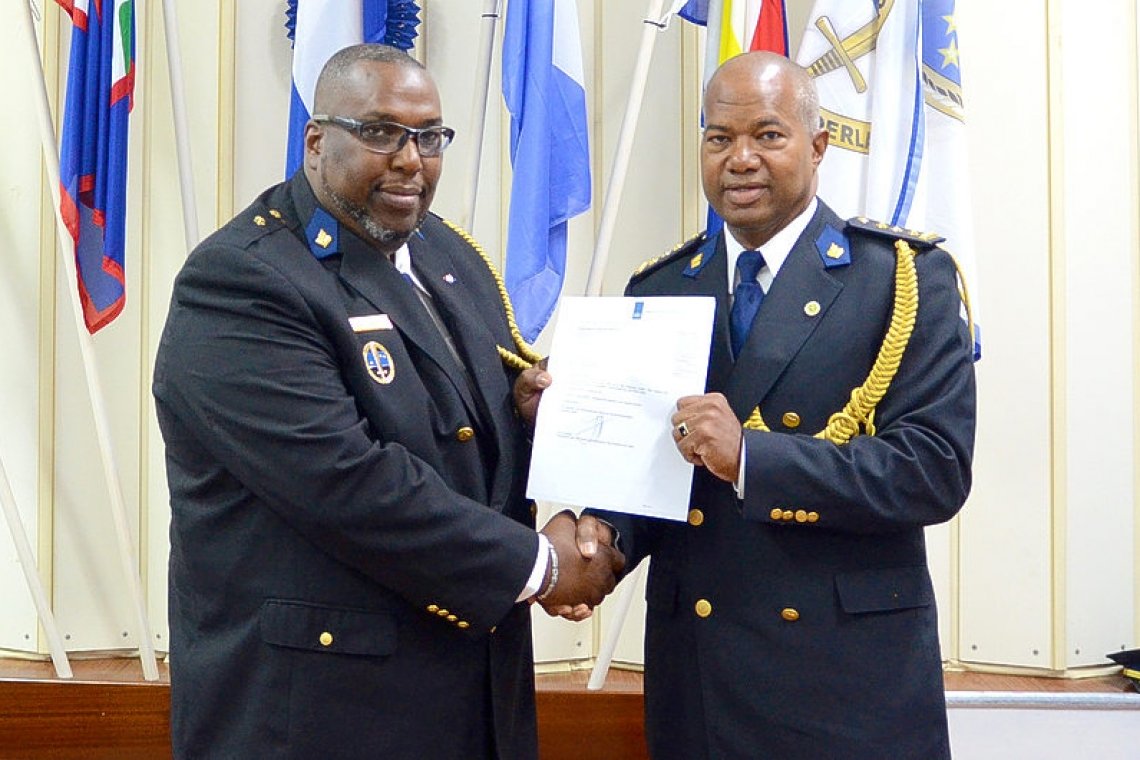 SABA–The official installation of Wingrove Baker as Saba’s Chief Basic Police Care of the Caribbean Netherlands Police Force KPCN on Tuesday morning, February 4, was deemed “historic”, as he is the first Saba-born person to hold this position.

Born and raised in The Bottom, Baker said he accepted this position as “a proud Saban with great honour and humility,” thanking the Lord for giving him guidance and strength.

Baker, who joined the then-Netherlands Antilles Police Force KPNA in December 1991, said it had been quite a journey to become Saba’s police chief. His appointment took effect per February 1, 2020.

When he started his education at the Police Academy in the Netherlands, Baker was asked where he was from. When he said that he was from Saba, the academy official responded: “One day, then, you will become police commander in Saba.”

“He planted a seed, which grew and bloomed,” said Baker at the ceremony at Eugenius Johnson Centre where he received his official appointment document and the Saba flag was transferred to him.

The new police chief had assuring words for the Saba community: “Your appeals for local police officers have not fallen on deaf ears,” he said, promising to take up the matter of recruiting police personnel from Saba with the higher authorities. At the same time, Baker urged the community to look at the Saba youth, “see their potential and speak into their lives.”

Cooperation with the local community is a must, said Baker. “We serve and protect. That is done based on a good bond with the community. As police, we need that solid bond to do our work. We cannot do it alone.”

He also pledged to keep working closely with all partners in the justice sector “to keep Saba and the Caribbean Netherlands a safe place to live and visit.”

Island Governor Jonathan Johnson too spoke of the importance of cooperation. “Together, as a team, we achieve more. Here in Saba, a lot of the work gets done by small teams, and cooperation is therefore essential.”

As his first official deed as police chief, Baker installed Maria Victoria Melaan as the new community officer and Jakiel Balimoi as the new senior and acting chief.

Baker gave special recognition not only to his wife Malusca for her relentless support, but also to the Saba police team, consisting of six officers and three members of the Royal Netherlands Marechaussee. About his team, he said: “None were born here, but they all came here, leaving behind their families to keep Saba safe.”

Baker took over the position from Gert Geerdink who came to Saba from the Netherlands, where he works at the National Police, a year ago. Geerdink acted as police chief, while also coaching Baker in his new job.

During his speech, Geerdink commended Baker for his passion for his job, his love for his family and God, for standing for what he believed in, for being to the point and for looking at different angles when in search for a solution.

Geerdink said that in his new position, Baker was the oil in the machine, working with the authorities in the Netherlands, the KPCN and the Marechaussee, with an eye for the members of the Saba team, the buildings and material. “You are now the face of the Saba police.”

Geerdink also noted that cooperation is essential. “On a small island like Saba you have to make it work together.” He mentioned a number of large incidents that have taken place in recent times, including several fires, and expressed great appreciation for the Saba team.

Because of its small size, the team has to perform more tasks than on the larger islands and in the Netherlands where backup and specialist assistance is readily available. “Together with your team, you have the capacity to do your job well,” Geerdink said to Baker. “We have a well-educated and trained team in Saba.”

“You have developed a lot. You are ready,” KPCN Chief Rosales told Baker.

“You have run the operation in Saba well. Saba has a good chief in you,” said Basic Police Care Head Van der Giessen.