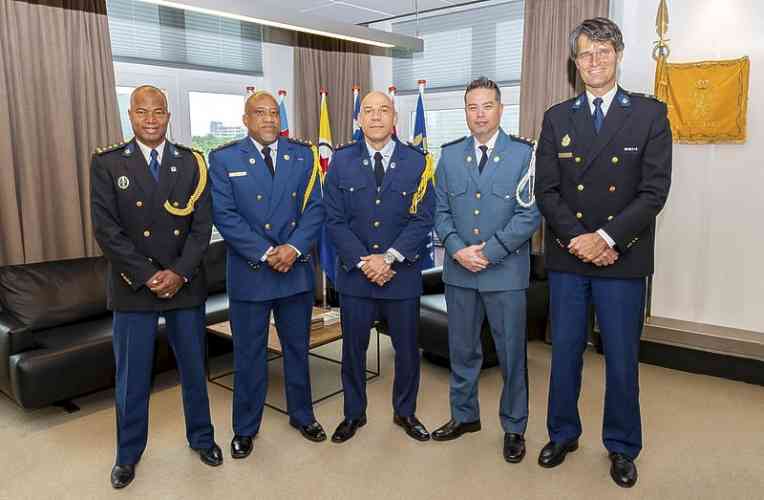 Police chiefs of Aruba, Curaçao, St. Maarten and the BES islands met with their counterpart in the Netherlands last week Wednesday to discuss continued cooperation.

PHILIPSBURG–The Board of Police Chiefs, consisting of Aruba, Curaçao, St. Maarten and the BES islands Bonaire, St. Eustatius and Saba top cops on a working visit in the Netherlands met with chief of the Dutch police force Erik Akerboom last week Wednesday.

The visiting chiefs also visited the Royal Marechaussee at Schiphol, the National Operational Cooperation Office DLOS, Financial Intelligence Unit (FIU), the Police Academy, the Netherlands Forensic Institute (NFI), the Caribbean info-cel and the High Impact Crimes (HIC) team of the Rotterdam Unit and the Ministries of Justice and Safety, and Home Affairs and Kingdom Relations.

Mutual cooperation was central to all these visits. St. Maarten Police Chief Carl John showed a film to his colleagues depicting the havoc caused by of Hurricane Irma on September 6, 2017.

John expressed his gratitude for the support from the Netherlands and in particular thanked the Dutch colleagues who contributed to the reconstruction of the island.