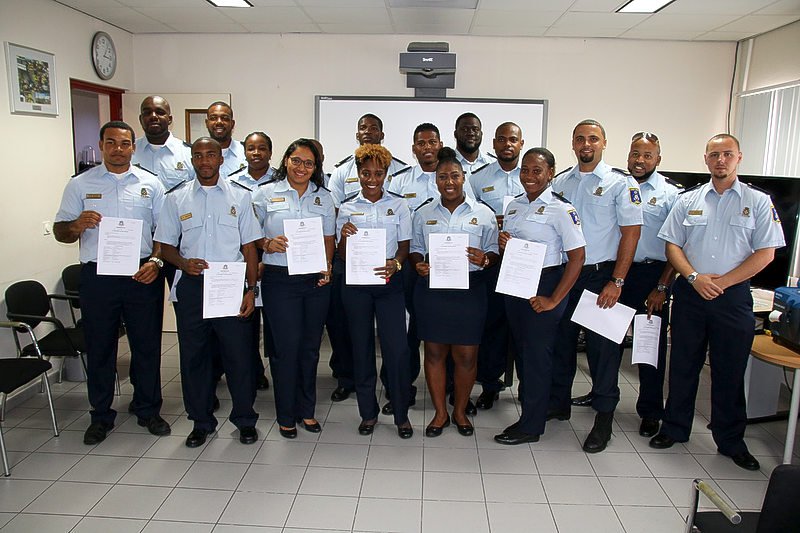 PHILIPSBURG–Officers within the Justice Ministry had a reason to smile, as some 39 police officers and coast guard personnel were given a promotion that, according to them, was long overdue.

Minister of Justice Edson Kirindongo stopped by the Philipsburg police headquarters to promote close to 20 officers, who had been stuck on the same scale close to two years. The minister stated that to this point, he has done and will continue to do all he can, to make sure all issues of the civil servants working in the Ministry of Justice are resolved.

Police Chief Carl John also congratulated the officers and encouraged them to continue with the good work they are doing. He expressed many words of gratitude to the Minister of Justice for living up to all expectations under the circumstances he is confronted with.

The chief continued to state that a lot has been done, and a lot of improvement has taken place within the police department since Minister Kirindongo has been in office and is looking forward to finalizing other projects that have been on standstill for a long time.

Leader of the United St. Maarten Party (US) Member of Parliament (MP) Frans Richardson on Friday congratulated the police and coast guard officers, who finally received their decrees (landsbesluiten) from the Minister.

In addition to the decrees, the Minister announced that the Police force has acquired five tint meters, three K9 vehicles and radios. MP Richardson recalled that when meeting with the Minister before his tenure started, the party’s message was straight to the point: take care of the civil servants that fall under the justice Ministry. “Today I can say that the Minister is fulfilling his duty and has made the people of St. Maarten proud for the direct actions he is taking for civil servants,” Richardson said.

Richardson said he was happy to be at the ceremony, because the officers often reminded him of the promises made by the US for the justice ministry. “We are proud to deliver for you. As you continue to do your jobs to the level that you must, the people of St. Maarten will always have your backs and so will I,” he said.

Some 20 Coast Guard officers had a similar ceremony at their headquarters in Simpson Bay. Officers were pinned with their added stripes and congratulated by the minister.

They all have been promoted from “rookie’ to full-fledged police officers and Coast guards.

The minister congratulated all the officers and thanked them for the good job they are doing and the sacrifices they make on a daily basis to keep the citizens of Sint Maarten safe. He encouraged them to continue to serve the community in the best way they can, because they deserve it.