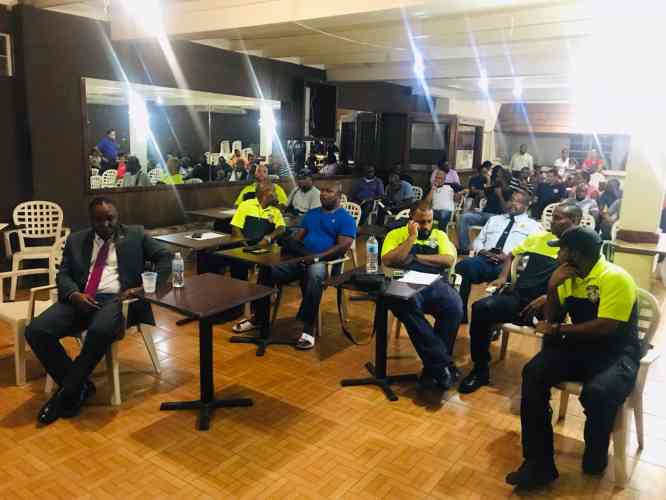 PHILIPSBURG–A number of police and Immigration officers expressed frustration with the slow pace with which authorities are addressing issues affecting them, during a meeting with their union representatives on Wednesday at Bute Hotel.

Immigration officers were particularly upset with what they deem to be a lack of attention for them and believe they have been neglected since they were placed back under the auspices of the Police Force.

Issues such as lack of uniforms, vehicles, their function book, salary scales and national decree (landsbesluit) were amongst the issues about which the members of the disciplined forces expressed concerns.

“We are really frustrated. Every time we come to a meeting, we are hearing the same thing over and over. We need to hear good news. We cannot continue to go to work frustrated every day,” one officer said in the midst of the question-and-answer segment of the meeting before posing a question.

The meeting attracted a large number of union members, estimated by NAPB President Rogerrel Mauricia to be about 80-90 persons.

After members were updated on issues on which the union was working and the status of pending matters, amongst other things, Mauricia told the gathering of officers that the union was not pleased that Justice Minister Cornelius de Weever had requested six months to a year to finalise the signing of a package for workers. He said the minister had not indicated why he needed such a lengthy period.

The package that has to be signed comprises the “rechtspositie” (function book) and salary scales for workers. The minister asked NAPB for time during a recent meeting with the union, much to the chagrin of the workers’ representatives.

When asked by The Daily Herald what form of action the union is considering, if this avenue should be pursued, Mauricia said the union is still thinking about what action would be appropriate to take.

Some workers said during Wednesday’s meeting that they expected action to be taken, as they had been waiting eight long years for their concerns to be addressed.

“We need to put our foot down. We cannot do this anymore. It’s not about the function book being held up, it’s about the package,” one union representative said.

An officer was against taking harsh action that can cripple the economy at this stage and suggested a more lenient approach in the form of continued dialogue.

Several NAPB union representatives explained certain issues to members, who had many questions regarding a range of issues.

One Immigration officer brought up the issue of uniforms, saying the way officers looked in their old uniforms at the ports of entry was deplorable. New uniforms were promised in September, but it is now November and the uniforms are still not received.

Mauricia said the union had enquired about this and patience had been requested. He said the uniforms would be distributed as soon as they arrived.

Regarding concerns about vehicles he said seven vehicles were available for Immigration, but had to be painted and would have “Immigration” on them to differentiate them from the police and for safety.

Windward Islands Chamber of Labour Unions (WICLU) President Claire Elshot explained earlier in the meeting the need for officers to sign up as members with the ABVO and NAPB unions so that they could meet the minimum requirements to have a seat in the GOA, the advisory body for matters related to civil servants. As members of the GOA, the unions would be able to speak on behalf of their membership.

The GOA recently changed its structure and unions now require membership of at least 250 to be represented in the body.