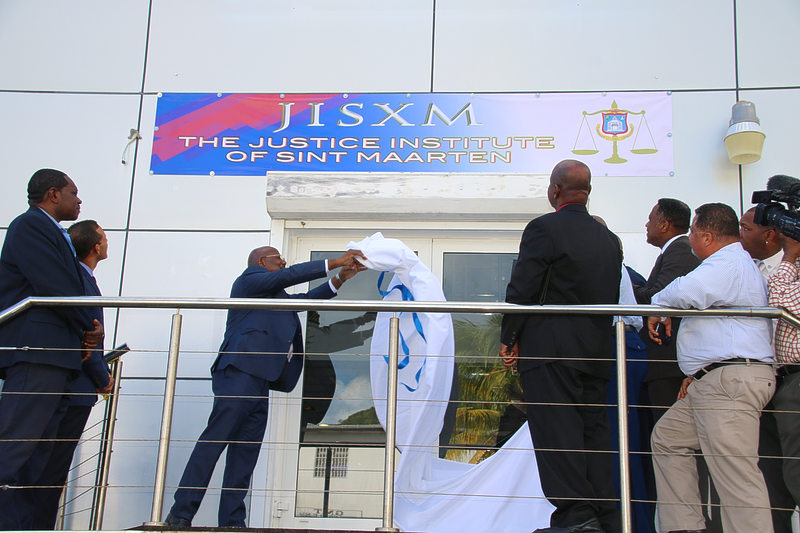 COLE BAY–Justice officials unveiled the name of the Forensic Lab and Shooting Range in the old Soremar Building in Cole Bay on Wednesday afternoon.

The Justice Institute of St. Maarten will house offices for the Justice Ministry and a state-of-the-art laboratory and shooting range.

The Police K-9 Unit also was certified by Minister of Justice of Aruba Arthur Dowers and St. Maarten Justice Minister Edson Kirindongo. The certified officers were Oscar the Belgian shepherd, Nora the Dutch partridge hound, Springer spaniels Jones and Missy, and cocker spaniel Ronny. They are anything but ordinary. They are the core of the country’s newest line of defence against crime and criminals: the K-9 Unit.

The united establishment was supported by the Justice officials of Curaçao and Aruba. The latter Dutch Caribbean country is such a close partner that the K-9 officers of St. Maarten and Aruba can assist each other. Aruba’s main dog handler/trainer helped St. Maarten police select the right dogs in the Netherlands for St. Maarten.

Aruba’s Minister Arthur Dower is happy with the work St. Maarten is doing and is further committed to working with the island’s Justice system. “Aruba is happy to help and share its resources in the fight against crime, he stated.

Prime Minister William Marlin continues to praise the police for their hard work and pledged continued support from the Council of Ministers.

Minister Kirindongo was happy with Aruba’s quick response to his request for assistance and wants the cooperation to continue. 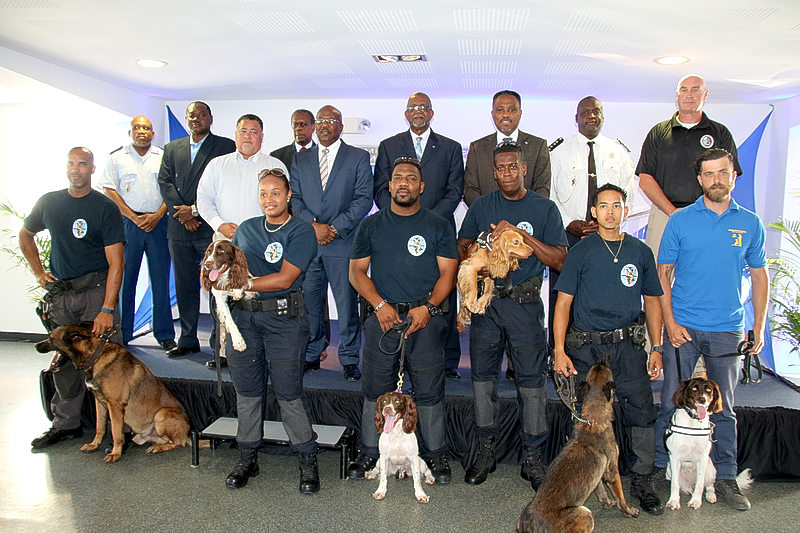 Police Chief Carl John said the police were making progress and anyone who could not see that was blind. The police will continue to use the resources given to them to the best of their abilities, he said.

The K-9 Unit will be available for random searches at the prison, the Port and Princess Juliana International Airport SXM, according to the officials. Each dog officer, along with its human partner (handler), demonstrated its skills for officials.

Ecstasy smugglers should beware of Nora and Sergeant Reckets Moesliken. Nora can sniff out even traces of the illicit drug. Major Igmar Woodley and Missy are trained to seek out marijuana. Cocaine is the product Jones and Corporal Jeandaline Martina look for. Martina is the only woman in the K-9 team and is the country’s first-ever woman dog handler.

Oscar is a large fierce Belgian shepherd partnered with Major John Boyrard. All the smaller breed dogs are trained sniffers, while Oscar is a surveillance dog. Two more sniffer dogs are expected to join the K-9 Unit in the future.

The Aruba Government was thanked for its outstanding cooperation. That country continued to pay the salary of the trainer/handler while he was on the project for St. Maarten, saving the local Government more expense.