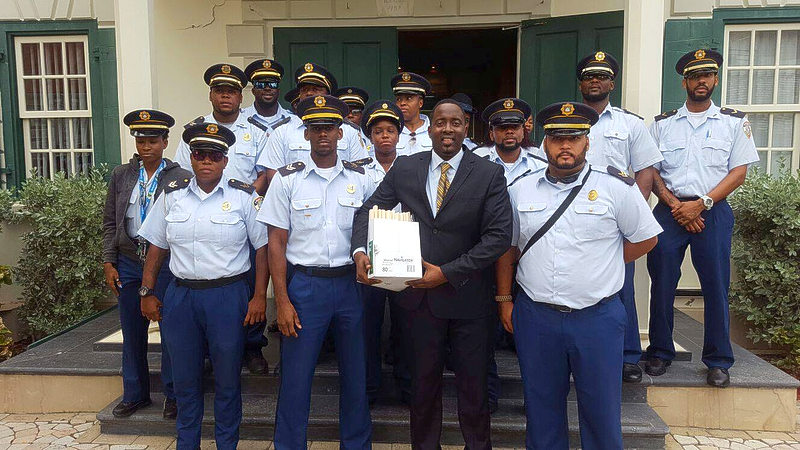 PHILIPSBURG–Some twelve police officers started legal proceedings against Country St. Maarten on Monday. They are contesting their dates of appointment (aanstellings datum) and remuneration since working for the St. Maarten Police force KPSM.

Police Inspector Lyndon Lewis Jr. handled the administrator appeal case. He is known for defending himself during civil cases, took on the 12 officers’ cases and personally defended each police officer for 2½ hours in the Court of First Instance while the officers were present.

Lewis told The Daily Herald after he filed the cases that he was one who would defend his people once it was for a good cause. He drafted appeal petitions and was accepted by the court.

A group of police officers received their decrees from the Minister of Justice on July 22 during a ceremony held at the police headquarters in Philipsburg. The officers accepted the long-awaited promotions, but ultimately were disappointed, according to Lewis.

“The officers were taken into service since 2012. They were selected to follow the basic police training (BPO). The cadets, however, were placed in the daily operation of the Police Force instead of sitting on the benches as mentioned in their former decree that stipulated that they were police cadets in training,” stated Lewis.

The cadets stated in their court case that they had never received proper training to fulfil their duties as full-fledged police officers, because the KPSM management team claimed that there was no money in the budget for the BPO.

“The cadets were consistent in asking about the training and they were always promised on a certain date that the training was going to start, but it never did. The officers worked as full-fledged police officers for nearly five years to receive a promotion with a retroactive compensation for only one year,” said Lewis.

The 12 cadets who received their decrees were very disappointed with the way things turned out and decided to seek assistance from Lewis Jr., who decided to take on their case and be their legal representative in court.

Lewis pleaded his clients’ cases and wants them compensated for their service to the country as full-fledged police officers from February 1, 2012, to the present, and for them to be promoted to police sergeant (brigadier).

Government was represented by Attorney-at-law Aernout A. Kraaijeveld,who stated during the case that the officers had never worked as full-fledged police officers.