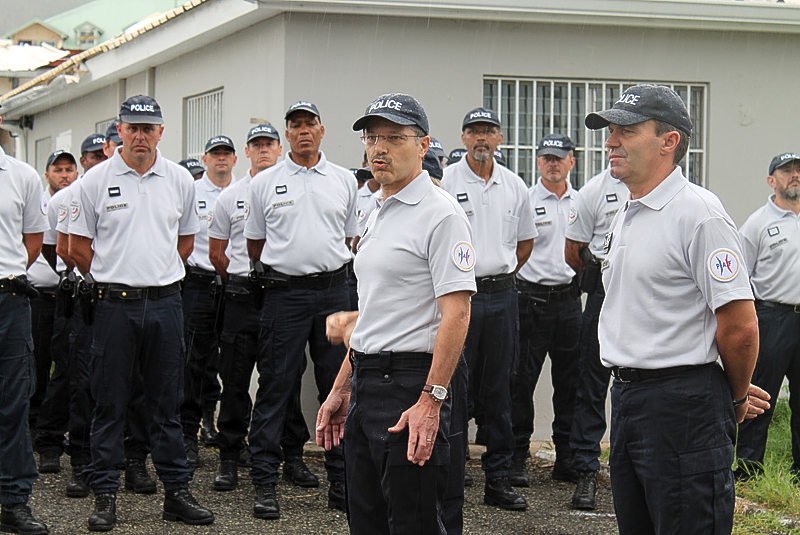 MARIGOT–The St. Martin brigade of Police aux Frontières (PAF) received a visit Tuesday from the head of PAF in France, Directeur Central Fernand Gontier, at their headquarters in the former Gendarmerie building in Marigot.

The brief visit of the top official from Paris was intended to give moral support to the police working in challenging conditions post Hurricanes Irma and Maria. Gontier was accompanied by the Directeur Zonal of the PAF (Antilles-Guiana) Philippe Duporge and Resources Directeur, Marie Helene Justo.

Gontier addressed the assembled police officers offering words of encouragement and support. Reinforcements for St. Martin have brought the number of police up to 60 from 30. Some 20 of the 30 police officers have been drafted in from France, Martinique or French Guiana and will stay for 15 days before being replaced on rotation.

“The police have been affected by the hurricanes as much as the population and I am here to reassure them they have my full support,” Gontier told The Daily Herald. “We have already provided aid and reinforcements for them to work in the best possible conditions and we continue to monitor that. The welfare of each police officer is important. They are in our thoughts.

“The purpose of the reinforcements is to have a group that can be totally integrated in the context of this catastrophe,” he added. “From what I have seen this morning the damage from the hurricanes is truly shocking.”

Gontier said the police in the aftermath of the hurricanes reverted to their primary mission which was to police the territory, control the borders, protect the inhabitants, provide security for businesses, and apprehend looters.

Asked if he could see an increase in the number of police in the future, in view of lawlessness emanating from a broken economy and unemployment, he said most likely there will be a “partial” increase.

“No doubt lessons will be learnt from these hurricanes and it will force us to review our resources and way of working in the future, to be much better prepared, including coordinating and strengthening cooperation with our counterparts on the Dutch side.”