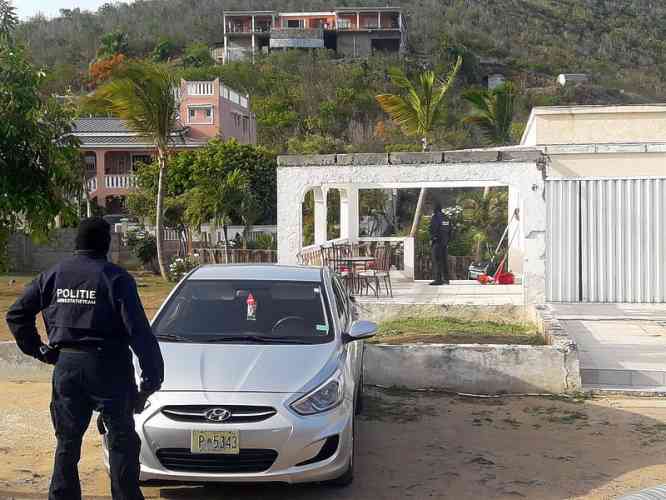 Police searching the home of the suspect on Monday.

PHILIPSBURG–The Police Force of St. Maarten KPSM acted swiftly after it took notice of a post on Facebook on Monday offering residents money to assassinate members of the Police Force.

Police searched the home belonging to the family V. on Defiance Road on Monday at 4:00pm.

According to police spokesman Chief Inspector Ricardo Henson, the search was done based on a threat sent out publicly via social media in which the suspect, a member of the V. family identified as D.V., is recruiting members of the community to join him to form a team to take out the St. Maarten Police Force. The reward for taking part in this team would be to the amount of US $70,000.

“Immediately after the Police Force became aware of this threat the Arrest Team and other investigating officers were mobilised and headed to the home of the suspect. This threat on the lives of the members of the entire Police Force is taken very seriously.

“KPSM and its members will never back down from anything and will go out and arrest any- and everyone involved in carrying out this threat. If KPSM backs down, then the community of St. Maarten who depend on the safety and security KPSM provides will never be safe. This is unacceptable and is also a threat to our society.

“The suspect was not at home when the investigating officers arrived on the scene. A search of the home followed during which several electronic devices were confiscated for further investigation. The suspect in this case has not yet been arrested. KPSM in the meanwhile has learnt that the reward had increased to the amount of $100,000,” stated Henson.

KPSM warns that anyone who takes part in any form in carrying out this threat will be arrested and go through the legal process. KPSM said in its statement that the police will not stop searching for the suspect and anyone else involved until they are arrested and placed in custody.