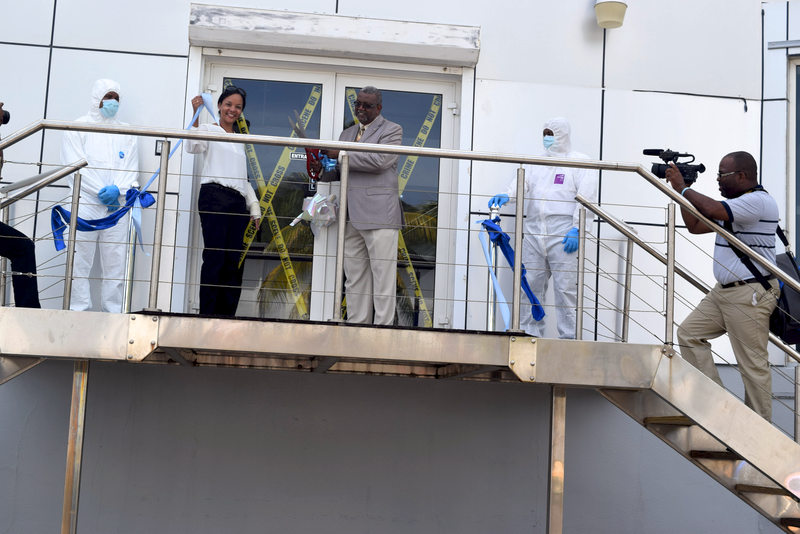 Kirindongo described the opening of the building, a project that has been six years in the making, as “another milestone in the history of St. Maarten.”
He sees the lab growing “step by step” with the goal of not only serving St. Maarten. It is hoped that in the long term, the lab will have service agreements with the Netherlands and the United States.
Similarly, the Minister hopes the shooting range can be used for joint training with neighbouring agencies.
Speaking about the lab, Jacobs said it used to be a “one-woman show” with one officer shouldering the majority of the responsibilities, which has grown into a team. That team includes two fingerprint experts and two digital forensic experts, and an engineer. The team is moving into cyber forensics with help of the International Criminal Police Organization Interpol.
“A lot of investment” is still needed to aid the already good police work, said Jacobs. The good police work has been proven by the team having worked without any contamination of collected evidence.
In past years, the police have solved violent crime with technical expertise of the forensic team. Jacobs highlighted the “regatta murders” as solved by good police work and technical expertise.
She was happy to see “the need for a good police lab” has been “acknowledged” with the opening of the new facility.
On further building the team, Jacobs called on more young people to consider joining the police and the forensic field.
Blessing the building, Reverend Lloyd Brisset said crime is “rampant” in the country. It is “destroying our way of life, our one-pillar economy and the good name of St. Maarten abroad.” The churches have been “praying for the police” as they carry out their jobs.
United St. Maarten Party (US Party) leader MP Frans Richardson said in a press statement the opening is “the latest in our efforts to give the Police Force of St. Maarten the tools they need to effectively and efficiently fight crime … I want to see the day come when our lab not only plays a key role for solving crime locally, but can lend a hand to our neighbours as well.”