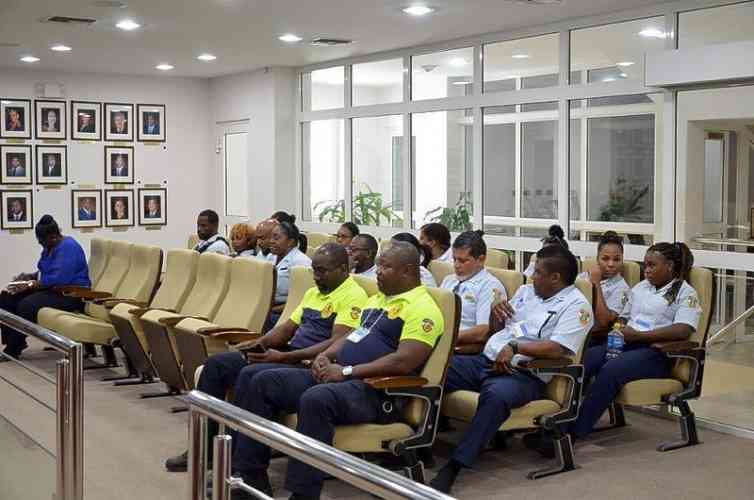 A number of workers attended the meeting to get information first-hand.

PHILIPSBURG–Representatives of the unions representing St. Maarten Police Force KPSM workers feel misled, as they had been invited to what they were told was the ceremonial signing of their function book earlier this week, only to learn that the document signed excluded a covenant to which they had collectively agreed in 2016.

Justice Minister Cornelius de Weever said the signing had been symbolic, because the original document was being processed to be published and that document has been sent to all unions with an invitation for an information session. He also stressed the importance of teamwork in this process.

Member of De Weever’s cabinet Saskia Solomon-Thomas said also that based on a court verdict, two legal status regulations are already in effect for St. Maarten.

Windward Islands Civil Servants Union/Private Sector Union (WICSU/PSU) President Sophia Rismay-Peterson told Members of Parliament (MPs) during a meeting of the Justice Committee that the unions had received an informal invitation from Police Chief Carl John on behalf of De Weever on June 3 to be present for the signing of a document.

“Before it even started, we were informed by the Minister that it was a symbolic signing and that all documents were signed off prior and already submitted,” Rismay-Peterson said.

She made clear that the unions had not been given any form of documentation prior to the signing to review or to give their comments as to whether they were for or against the content.

“We were never even offered a chance to browse the documents prior to the signing. After asking to see what was signed between Minister and Chief of [Police – Ed.], we were able to briefly browse through and from what we gathered, the covenant was null and void and the regeling [regulation] from the Minister of June 3, is rather vague.”

She said also that the function book which contains the salary scale of the workers was not included for viewing.

“After the event, we asked for copies and after a continuous back-and-forth with all those responsible we got the documents after 5:00pm yesterday [Tuesday],” she said noting that the unions were “not pleased” and “not happy.”

“We can still not answer any of the question of our members as to what will be their new positions in reference to their salaries. What is it going to be? There are no figures attached to the documents.”

NAPB President Rogerrel Mauricia said the unions had been invited to witness the signing, but their photos had been taken for what seemed to be a “political advertisement.”

In a PowerPoint presentation last evening, Solomon-Thomas said the understanding was that Police Force employees had no rechtpositie (legal status regulation). However, this is not the case. She said there are currently two regulations in effect: the Korps Politie [Police Force] Sint Maarten and the Korps Politie Netherlands Antilles 2000, both of which are deemed valid.

She said a court verdict of January 30 had concluded that although the currently-published regulation was missing its entry-into-force decree, it had entered into force at the time of the dissolution of the Netherlands Antilles.

She explained that the process is being handled in separate phases. The first phase is to establish a clarity regarding the rechtpositie of the police force and the establishment of the new function book and salary scale. Phase 2 is for the placement of workers in service in the functions established in the new KPSM function book. Phase 3, is the handling of the retroactive adjustment of the personal career path of each employee and the related financial adjustment.

In giving an update on the progress of these matters, she said discussion had been held with Balance Consultancy Group to create functions needed. The Committee for Civil Servants Union (CCSU), formerly the GOA, had given the green light for the final draft of the function book.

The migration strategy makes clear that there will be no downsizing, workers will follow their function, and if the function does not exist anymore they will be offered another fitting position. The last pay is also guaranteed, as well as the Windward Islands Allowance, and temporary contracts will remain in effect.

The handling of the retroactive adjustment of the personal career path of each person and the related financial adjustment will only start once phase 2 is completed. Only on completion of phases one and two will parties have a sound premise to make correct calculations for phase 3, and as such be able to ensure that it is budgeted for 2020 and beyond accurately.

“The process of addressing phase 3 is anticipated to be lengthy and as such deemed unfair to be included in that pf phase 2, which would not allow all urgent personnel to be placed simultaneously. However, it will immediately stop the mounting debt.”

The desired formation of KPSM is 420 full time equivalents (FTEs) as established in the new function book. A total of 275 FTEs are currently on hand and they will be placed in the formation plan and for the expansion to continue along these lines.

Changes were not made to function descriptions and the book has been sent to all unions, although it may be possible that they did not “check their emails as yet.”

She said that while the placement is a lengthy process, the hope is for it to be rectified as of June 1, retroactively. If everything goes smoothly, she anticipates that everyone will have been placed by the end of the year, assuming that there are no appeals and no discrepancies.

The intention is to include the unions in the process so that appeals can be minimal. While the intention is for the retroactive aspect to be included in the 2020 budget, there “is some room” in the 2019 budget to absorb, with immediate effect, the placement of personnel in their functions with their new salaries retroactive to June.