Home Local News Police, VKS on high alert  due to French side unrest | THE... 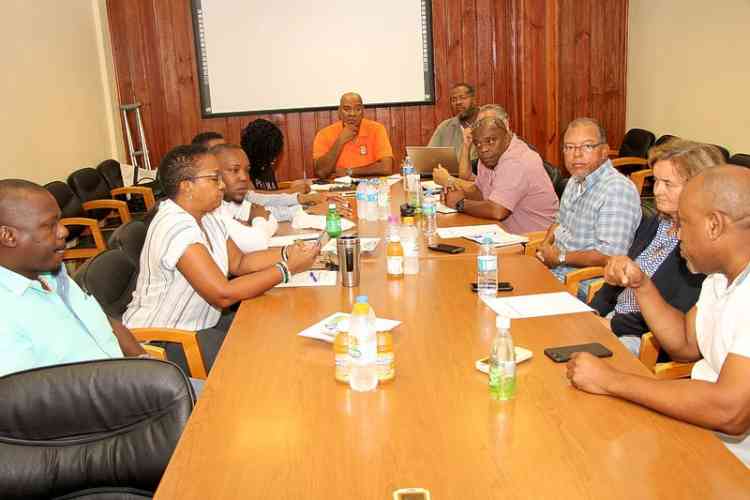 PHILIPSBURG – – Prime Minister Silveria Jacobs, Justice Minister Egbert Doran, Tourism, Economic Affairs, Telecommunication and Transport (TEATT) Minister Mellissa Arrindell-Doncher, along with the Police, Immigration department and senior staff of several ministries held an emergency meeting on Saturday to deal with the consequences of the effects of the current demonstrations and road blocks happening on the French side over the last three days.

“We are in solidarity with the people of French St. Martin and their struggle, and pray that dialogue will resolve the current impasse in the interest of all concerned. Our priority at this time is that our community remains safe.

“The government with all its Emergency Services Departments and departments are doing all in their power to keep the St. Maarten residents and visitors to our island absolutely safe and sound. There is open communication between the government of St. Maarten and the representatives of the Collectivité of St. Martin as well as the Préfecture regarding updates concerning the protests and the blockades,” said Jacobs.

According to Doran, on Friday afternoon the Gendarme officially informed the St. Maarten Police Force KPSM of the current state of unrest on the French side.

The French authorities requested assistance from St. Maarten police in deviating traffic going towards the French side at the Bellevue and lowlands borders, as these roads were blocked just after passing the borders at Cupecoy and Belvedere, said Doran in a press release on Saturday.

Doran accepted this request and mobilised police to guide traffic away from the Belvedere and Lowlands Borders.

“However, it was noted that in a few instances drivers, mainly in the area of Belvedere, were reluctant to follow police instructions, which in turn led to the officers being forced to take measures in order to maintain their own safety and to keep the situation from escalating,” said Doran. It is understood that persons at these borders were not allowed to cross with their vehicles.

However, Doran also said the borders were never closed by police officers.

As a result of Saturday’s meeting, stakeholders decided that police will heighten its preparedness and increase their presence through patrols in strategic areas on the Dutch side. This is to “avoid any unwanted situation emanating from the escalations on the French side”, according to the press release.

Doran said he will be requesting the St. Maarten Volunteers Corps VKS to be on alert so it may be able to quickly assist in maintaining order on the Dutch side, if necessary.

“I want to thank the local law enforcement officers and to let them know that the hard work they put into keeping our people safe did not go unnoticed.

” At the same time, I discourage Dutch side residents from going to the French side during these trying times, unless for emergencies,” said Doran.

He also said he regrets “this serious situation” and wishes his “French counterparts and our sisters and brothers of the French side much strength and the wisdom for both parties to find a speedy resolution to this very serious situation.”

“You are in our thoughts,” concluded Doran.