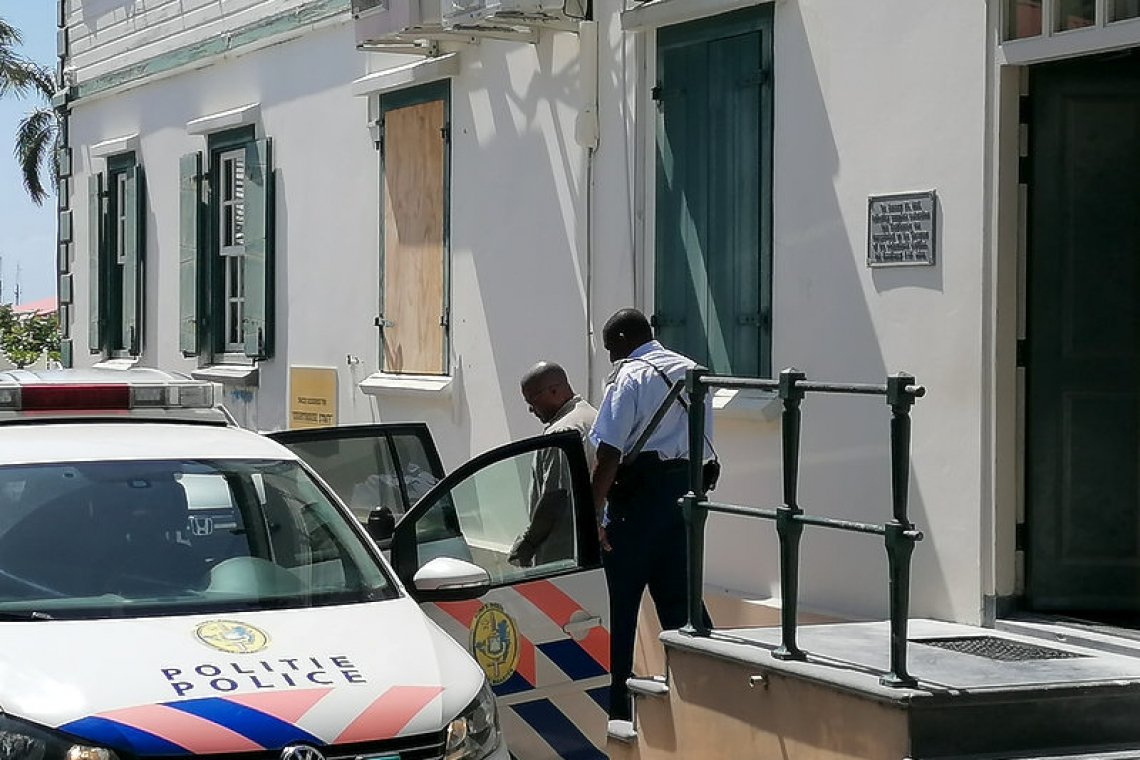 A police officer taking Alexander Revan to a waiting police vehicle after the hearing in his case on February 18. (File photo)

PHILIPSBURG–The man who left one man dead and another injured in a broad-daylight shooting in the vicinity of Clean St. Maarten and telecommunications company TelEm on Pond Island on October 3, 2019, was sent to prison for thirteen years on Wednesday.

During the February 18 hearing in this case the prosecutor called for a prison sentence of 20 years as he considered murder, attempted manslaughter and possession of an illegal firearm proven.

The Court found Alexander Revan (46) guilty of manslaughter and attempted manslaughter. He was ordered to pay US $15,511 in damages to the victim’s family.

The shooting incident appears to have originated in a large number of altercations since early 2017 between the defendant and the victim over an argument about the lease of a plot of land. Revan built his vehicle-repair business on this piece of land and has also been residing there in a container since Hurricane Irma struck St. Maarten.

The defendant was once again confronted by the victim and an employee during the October 2019 incident. He said he had been verbally abused and he had stepped out of his car carrying a baseball bat. The bat was taken away from him during a brawl and he was hit on his back, his head and in his face.

Revan left the Pond Island area afterwards, but returned 35 minutes later with a firearm and shot the two men. One of the victims, an older man, died at the scene, having sustained a fatal gunshot wound which caused a laceration of the aorta and a collapsed lung, according to the investigating forensic pathologist.

Revan turned himself and his firearm in at the Philipsburg police station after the shooting. He told the police, and the Court during his trial, that he could not recollect anything about the shooting, claiming that he had “blacked out” as he had been overcome by emotions.

The prosecutor had difficulty believing that, as the defendant provided detailed statements about the altercations leading up to the shooting and could recall what had transpired during the preceding brawl, but his memory failed him where the shooting was concerned.

Revan received a lesser punishment than demanded by the prosecutor, as the court did not follow the prosecutor in his assumption that he had shot his victims in “cold blood.”

According to the judge, premeditated murder could not be proven, as Revan had “flipped” as a result of the ongoing conflict with the victim and the mistreatment that preceded the shooting incident.

Attorney-at-law Monique Hofman had said in her pleadings that her client had been no longer capable of making any “clear-minded” assessment of the situation.

The judge said it could not be excluded that the defendant had lost control over himself after the conflict with the victim had escalated.

According to the investigating psychiatrist, Revan was “clearly” traumatised by the events of October 3, 2019. The expert said that a black-out or amnesia can occur in situations of great emotional stress “as in the case of the traumatic beating … by two assailants, one of whom had been verbally abusing him over a long period, apparently two years.”