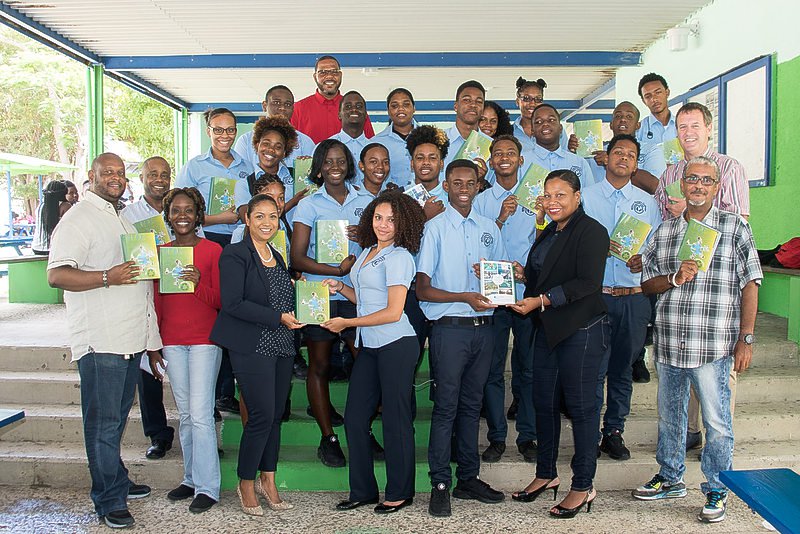 Each company sponsored 500 of the hot-item Agendas for a grant total of 1,000 for the students of the largest secondary school in St. Maarten.

Handing over the Agendas to MPC students and MPC officials at the school on Friday, August 18, were Port St. Maarten Sales and Marketing representative Ichel Moeslikan and Administrative Assistant Iris Richardson, and Airport SXM Marketing Officer Magdiona “Maggie” Gumbs. MPC was very happy to receive the Agendas for its student population, HYPE coordinators said in a press release on Tuesday, and both companies are elated to back this educational product, which will help students become more organised when it comes to their classes and assignments.

Gumbs noted that Airport SXM is very pleased to be on board as a sponsor of the 2017-2018 HYPE Agenda, as it is a product that can help students in and out of the classroom. She said the Airport has been supporting the HYPE Agenda team consistently since 2014, making it possible for high school students to own their own copies and alleviating a bit of the back-to-school burden on parents, while backing a locally produced product.

Moeslikan said Port St. Maarten believes in education and in supporting initiatives that can help students academically. She said Port St. Maarten has been a firm supporter of the HYPE Agenda since 2013, adding that it is part of the Port’s corporate responsibility. She expressed hope that students make good use of the Agendas and get themselves organised as it relates to their educational activities.

HYPE Agenda Coordinator Zulayka Peterson thanked both companies for their generosity, saying it was commendable to see two of St. Maarten’s flagship companies backing an educational product that was produced by the youth for the youth.

“Thanks to Port St. Maarten and SXM Airport, our future leaders at MPC now have an item to help them as they are moulded to take over our roles in the future,” Peterson said. “SXM Airport and Port St. Maarten have once again demonstrated that they are good corporate citizens and supporters of education.”

The HYPE Agenda 2017-2018 is themed, “Preservation and awareness of our environment, Treasure the world we are in.” The Agendas are specifically tailored for the academic year and cover the months that coincide with the school year, making them easy for students to use for school-related reminders such as noting down their assignments, projects, homework and other school-related matters. Also included is useful information such as school vacation dates and study-financing information.

This is the sixth edition of the HYPE Agenda. The first was produced in 2008. It was such a big hit amongst high school students that the second one was produced in 2010. This was followed by Agendas in 2013, 2014, for the 2015-2016 school year and now for this school year after a break last year due to challenges in sponsorship.

The HYPE Agenda team is seeking more sponsors so that students at other schools can also receive complimentary copies of this locally produced product. Businesses and organisations interested in sponsoring can contact Peterson at tel: 1-721-520-1941.