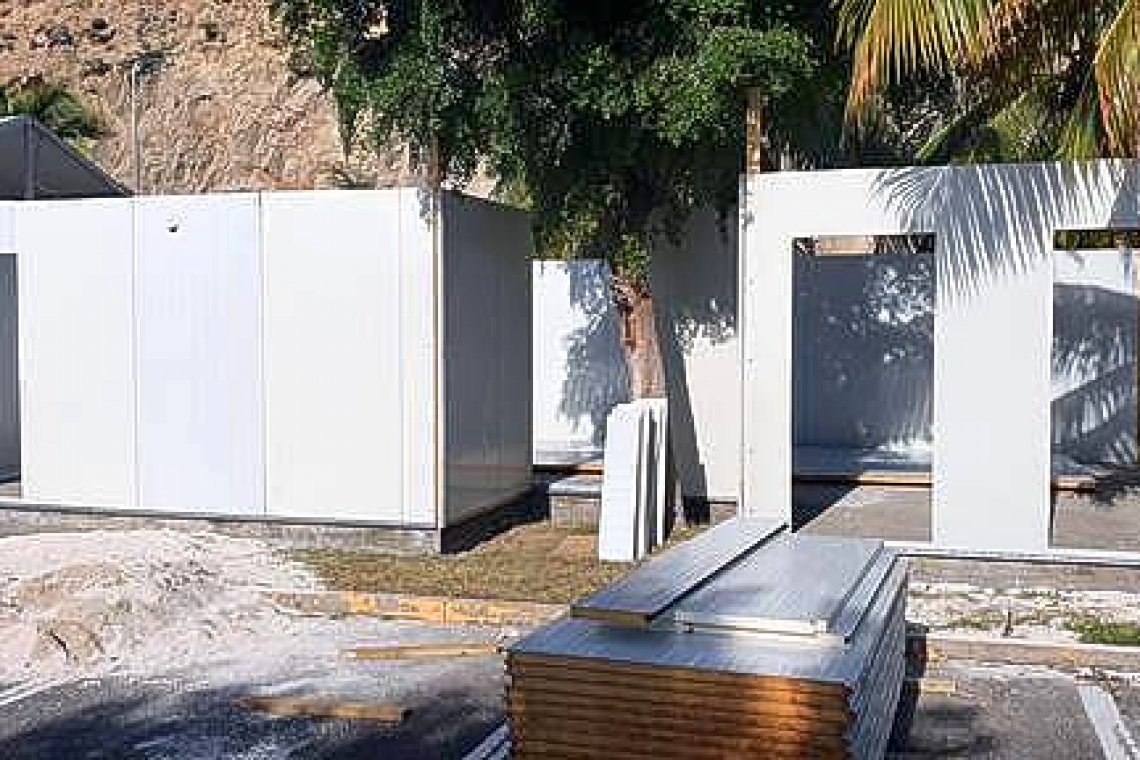 The Mini-Medical Unit under construction.

PHILIPSBURG–Port St. Maarten has enhanced its sanitisation measures throughout the Dr. A.C. Wathey Cruise and Cargo Facilities via its “Sterile Port Protocol” and is in the process of setting up a Mini-Medical Unit (MMU).

The MMU will serve to quarantine and/or provide medical examinations if the need arises. Hygienic and security protocols are in place in connection with vessels that have permission to call at the port, it was stated in a press release on Thursday.

Cruise ships are only able to re-fuel and obtain food provisioning. Cargo vessels are allowed to enter and deliver consumer packaged-food goods and household products out of Europe and the United States. These calls continue on a weekly basis as normal.

Cargo operations continue on a 24/7 basis, unhindered. Part of the port’s staff has been given the option to work remotely from home to comply with the social distancing recommendation by public health officials. Social distancing entails having at least a one-metre (three-foot) distance between yourself and anyone who is coughing or sneezing.

The “Sterile Port Protocol” falls under the scope of the Ordinance Public Health which is part of the International Health Regulations as issued by the World Health Organization (WHO). This is part of the port’s procedures for responding to infectious disease situations and pandemic plan. The port has also established a “Crisis Emergency Service Department” to deal with the initial phase of any infectious disease until medical and public health officials arrive.

The port has also strengthened its protocols with stakeholders such as its agents and handlers on procedural details that are in established protocols related to maritime health declarations. Vessel agents have been advised of their role and the ship’s responsibility to provide the necessary documents required for entering the country.

The Port Community System (PCS) is the tool being used to centralise all communications with port stakeholders. The PCS involves data-sharing among stakeholders and third parties covering cargo and cruise operations at the country’s seaport of entry.

The Ambulance Department has been added to the PCS system. The PCS software has been adapted which will allow key port operational staff to review the status of the maritime health declaration which would indicate the approval process from Ministry of Health, Labour and Social Affairs VSA, Collective Prevention Services (CPS). Immigration and Border Control Services will also have access to the system. This is part of the new and improved digital solution that the port has implemented.

According to Port St. Maarten Management, the PCS system is part of the port’s long-term strategic approach in digitisation planning and building a more inclusive data centre platform.

PCS is an extension of Port St. Maarten’s Terminal Operating System that would further enhance the port’s operational excellence platform, linking, for example, a cargo/container manifest to an incoming/outgoing vessel, to warehouse/storage handling and receiver pick-up, it was stated in a press release.