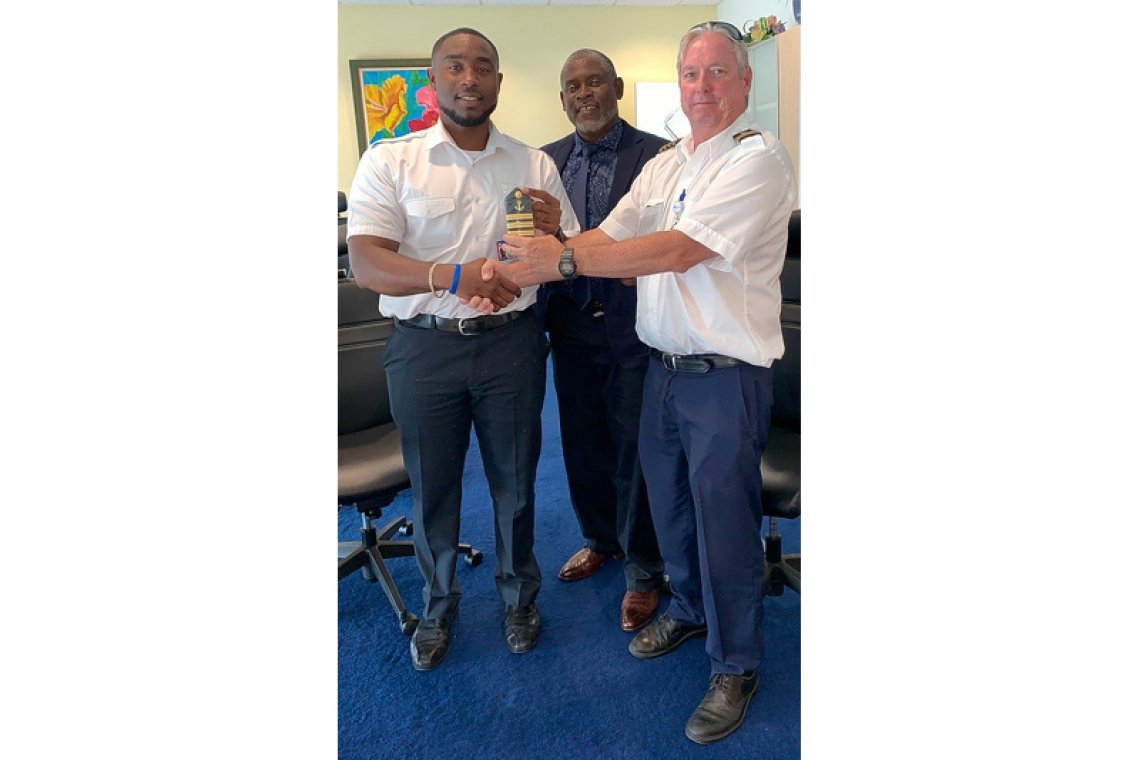 PHILIPSBURG–Local maritime pilot Joshua Johnson signed a contract with Port St. Maarten on Friday, February 7, in what the port described as a “milestone” moment.

“Joshua Johnson’s journey is a remarkable one that displays determination and perseverance,” said Port St. Maarten in a press release on Sunday.

“The sky is the limit. From a high school dropout at 17 [years old – Ed.] to becoming a maritime pilot today at Port St. Maarten, the journey was not easy. There were lots of struggles along the way that could have held me back from achieving my goal,” said Joshua.

“There were many times that I felt like throwing in the towel, but I pulled through. My journey did not only comprise struggles, but it has helped in sculpting me into the person I am today. Seeing the world, experiencing different cultures, the long hours and dedication I gave – which I, at first, did not even know I had – is what made me Joshua Johnson,” he continued.

“My advice to the younger generation is not to conclude that all is lost if high school didn’t turn out the way you wanted or expected, and to believe in second chances,” said Joshua, adding, “I would like to take this opportunity to say a special thank you to Sabrina Jean-Voldemar, Chief Pilot Edmond Johnson, Senior Pilot T. Romain, my mother Juliana Arrindell and my father Eric Johnson.”

According to the port, Joshua started his first job at Port St. Maarten in 2008, when he was hired as a pilot boat deckhand. In this post, Joshua was responsible for ensuring the pilot got on and off the boat safely.

“He worked with the port for 2½ years and then decided to pursue studies in the Netherlands as a maritime officer and in maritime engineering,” said the port.

Joshua graduated in 2016 with a master’s licence in Maritime Navigation and a licence certifying him as a Maritime Engineering Officer.

“We would like to take this opportunity to congratulate pilot Joshua Johnson on his achievements so far in his career development,” said Port St. Maarten.

Pilots ensure ships’ safe navigation in local waters. “They are highly trained experts in ship navigation and pilots are considered the elite of marine professionals. Pilots board ships entering or exiting the port and navigate them safely in and out, avoiding any maritime hazards.

“Port St. Maarten sees the training of human resources … [as] essential for the country to maintain its hub function within the Northeastern Caribbean. A well-trained team is Port St. Maarten’s number one priority, as this reflects positively on productivity and efficiency of port operations,” concluded the port.