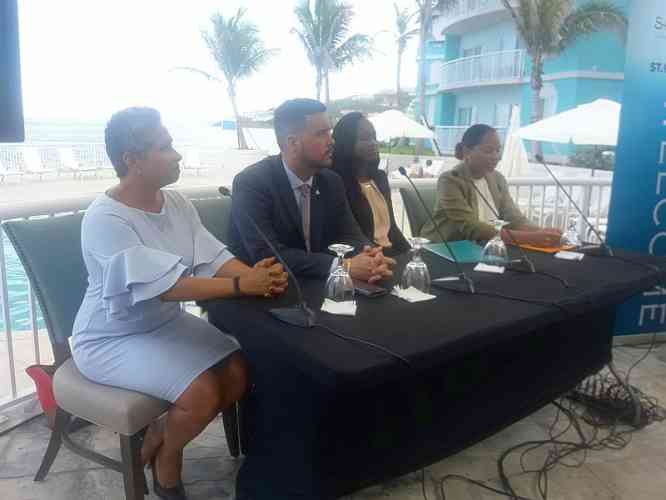 OYSTER BAY–Port St. Maarten is expected to welcome its one millionth passenger to the shores of the country on Thursday, as the port continues to exceed projections made following the destruction of the facility after the passing of hurricane Irma just over a year ago.

Chun and her counterparts in French St. Martin provided an update on the current state of the various sectors on both sides of the island as well as gave projections for the future.
Stakeholders painted a promising picture of the island’s recovery during a stakeholder’s press meeting.

Chun said Port St. Maarten has reported “good progress” in the industry. The Port said it had been operating above its projected figures at 12 to 15 per cent and was engaged in continuous discussions and support with industry partners.

PJIA
Princess Juliana International Airport also had good news reporting that its approximate weekly seat capacity stood at 24,229 in the winter of 2016/2017 and it now stands at 10,792. A total of 21 of the 26 airlines serving the country pre-Irma have returned to the destination, which represents 84 per cent. Additionally, four new carriers are now plying the St. Maarten route: Air Century, SkyHigh, SXM Airways and interCaribbean.
Prior to Irma the country had 394 weekly flights. By October 2018, the airport projects the number of weekly flights to increase to 310, which represents 78.7 per cent.

Acting Chief Executive Officer (CEO) and Chief Financial Officer (CFO) at PJIA Ravi Daryanani said during brief remarks at the conference that a little over 12 months ago, PJIA had been closed completely to commercial aviation. “You will recall that the Airport became an area of military operations, especially for evacuation purposes. Many of those who left then are back today and commercial flights are now at 80 per cent of what they used to be pre-Irma, with practically all the major airlines back to service our destination.”
He said by November, the airport hopes to transfer its normal operations, currently being performed out of temporary pavilions, back to the Terminal Building, the reconstruction of which will continue “as we strive to restore it to its former glory.”
“We are indeed committed to making our Airport the leader in regional aviation once again.”

The mould remediation at PJIA began on August 20 and is expected to last six weeks. Phase two of the PJIA roofing project is currently ongoing, while the tender for the cargo building was received during the first week of September. The cargo building should be finished by the fourth quarter of 2018.

The Airport is still committed to building a state of the art Fixed-Based Operations (FBO) facility. The Airport is also in the process of creating a strategic plan. The year 2020 is still the deadline for the full recovery of the landing field.

Marine Trades Association
As it relates to the St. Maarten Marine Trades Association (SMMTA), Chun said a high level of collaboration [of stakeholders came together – Ed.] for a marketing campaign geared towards the Monaco Boat Show held at end of September. A survey is being conducted by Port St. Maarten and that survey is to be able to certify that navigation channels are open.
“This is very crucial as to get the message out that the marine industry in St. Maarten is up and running,” Chun said. SMMTA will be attending the Antigua Boat Show in the first week of December and planning a special event to attract business to St. Maarten.

In a power point presentation, representative of the French Tourist Office Aida Weinum said that the hangar at Grand Case Airport should be completed by the end of this year. The takeover of the gas ground-handling operations is in full effect. “As a consequence, the Airport was able to see an increase in employment from 23 to 40 employees,” Weinum said.

The runway lighting work has begun, and it is expected that night flights will resume by the end of the year. “For now, the airspace closes at sunset,” she said.
As for hotel reopening in French St. Martin, Weinum said La Plantation is expected to reopen on October 15; L’ Esplanade Hotel at the beginning of November; Grand Case Beach Club by mid-November; Esmeralda by November 1; La Playa Hotel on December 10 and La Samanna Hotel on December 10.

By the end of this year accommodation capacity is expected to stand at 1,035 rooms in French St. Martin. In the meantime the French Tourist Office will be launching a temporary website in late September to provide updates and will be adding information from Dutch St. Maarten in its continuous collaborative effort.