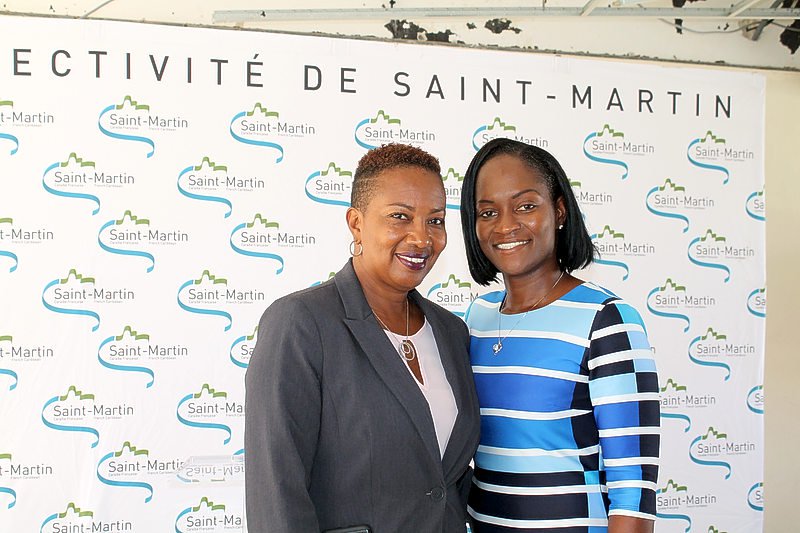 MARIGOT–First Vice-President Valérie Damaseau announced on Monday a series of events to be taking place on the French side throughout November to celebrate Tourism Month, a Caribbean Tourism Organisation (CTO) initiative that is celebrated every year.

The First Vice-President shared the podium with Minster of Education, Culture, Youth, and Sports from the Dutch side, Minister Silveria Jacobs. The Dutch side is collaborating on the first event this Sunday.

The Portrait and Poetry Corner is being held this coming Sunday, November 5, on the Marigot waterfront where the public will get to appreciate art and poetry on the theme of Hurricane Irma, pre and post Irma. Artists and poets will be present and performing from both sides of the island. This is a collaborative event from 10:00am to 6:00pm organised by the respective arts and culture departments and St. Martin Tourism Office.

A tree planting project is scheduled for November 7, called “1, 2, Tree.” It’s a project proposed by St. Martin Tourism Office, the Arts and Culture Department and the District Councils. The idea is to create the awareness and necessity to replant indigenous trees and plants to help the environment recover from the onslaught of the hurricanes.

November 7 is also Tourism Day and the First Vice-President and President Daniel Gibbs will each plant a tree in the garden of Hotel de la Collectivité.

A pre-St. Martin’s Day village will be organised in French Quarter on November 10 and 11 to celebrate the historic day. The two days will be packed with activities, entertainment, dancing, music and local food.

On November 26, a Christmas village will be set up outside Hotel de la Collectivité with the theme “Six Districts, Six Flavours, One St. Martin,” an opportunity to sample the best traditional and Christmas delicacies St. Martin has to offer.

The village will then be transported to the remaining districts every Friday and Sunday up until the weekend before Christmas, giving each district the chance to showcase their culinary and musical talents.

Minister Jacobs noted the Dutch side also plans to start planting trees in the schools which will continue through November and beyond. The Project Manager is Jocelyn Richardson and Environmental Protection in the Caribbean (EPIC) Foundation.

She also touched on preparations and events to be organised for St. Martin’s Day, a day filled with “church, activities, sports, culture, and marches.”

“It was a pleasure for me to be at the SXM Smile Again gathering. As far as I’m concerned that was the kick-off for the whole St. Martin celebrations,” Jacobs said. “We are also collaborating with the SXM Strong campaign. It’s all for the promotion of St. Martin, not just as a tourist destination, but for us as a people to remain focussed and reflect on where we were, where we are now, and where we will be in the future. We need to keep our eyes on the future that we will build back better and stronger.”

She added that St. Martin’s Day will be “totally on the cultural level.”

“I encourage St. Maarten people, wherever you are, to come home even if we are not in perfect condition. We have everything to be thankful for. St. Maarten is smiling again, house by house, person by person, and we are stronger together.”