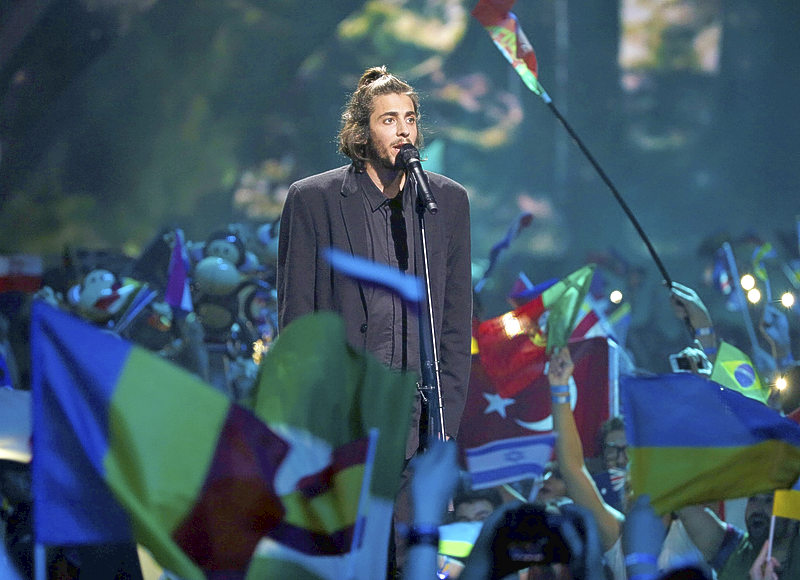 KIEV–Portugal’s Salvador Sobral won the Eurovision Song Contest on Saturday performing a jazz-style ballad written by his sister, taking the top spot for the first time in the country’s history and celebrating with a call to “put emotion back into music”.
Along with singers from Italy and Bulgaria, Sobral was a favourite going into the final of the annual song fest, which was hosted in the Ukrainian capital Kiev, and he led the voting throughout the evening. Portugal finished ahead of Bulgaria and Moldova.

A soft-spoken, 27 year-old with a scraggly beard, Sobral won with “Amar Pelos Dois” (“Love For Both of Us”), sung in his native Portuguese. This is the first time Portugal won since it first entered the contest in 1964. After being announced as the winner, Sobral performed the ballad again, this time in duet with his sister Luisa.
“Music is not fireworks, music is feeling,” he said after winning. “Let’s put emotion back into music.”
Asked later at a press conference whether he was now a national hero, he said: “Honestly man I just want to live a peaceful life, if I thought of myself as a national hero it would be a bit weird, you know.”
Ukraine hosted the competition while it also fights a war, hundreds of kilometres (miles) away in the east, against Russian-backed separatists. As is custom in the contest, geopolitics played a part. Russia boycotted this year’s event after Ukraine barred its contestant from entering the country – a symptom of the countries’ toxic relations since Moscow’s annexation of Ukraine’s Crimea peninsula in 2014. Ukraine won last year’s Eurovision with its Crimean Tatar entry Jamala.
In a grim reminder of the continued conflict in the east, Ukrainian President Petro Poroshenko cancelled his scheduled appearance at the competition after four civilians were killed in artillery attacks that Kiev blamed on the separatist rebels.
This was the 62nd edition of Eurovision, recognised by Guinness World Records as the longest-running annual TV music competition. It began in 1956 with just seven countries. Ireland have won most often – seven times in all – followed by Sweden.
Sobral came into the competition having told local media that he has a heart problem, without giving details. In the run-up he wore a sweatshirt drawing attention to the migrant crisis in Europe, but was asked to stop wearing it by the organizers.
“I hope this can bring a change not only to this contest, but to music in general, and pop music,” Sobral said about his win, contrasting his song to music normally pumped out “16 times a day” on radio stations.
Other hopefuls this year included Italian Francesco Gabbani. He was tipped to win with a number, viewed nearly 114 million times on YouTube, that mixes Buddhist imagery with a dancing ape, and that he explained as poking fun at the West’s superficial embrace of eastern culture.
Jacques Houdek, known as ‘Mr Voice’ in Croatia, blended pop and operatic singing styles in the song “My Friend”. Romania fielded a duo that combined rap and yodelling.
Ukraine has won the competition twice, including last year with a song about the mass deportation of Tatars from Crimea by Josef Stalin, and its winners performed on Saturday. Moscow fielded a candidate this year who had violated Ukrainian law by performing in Crimea after the Russian takeover. Kiev accused Moscow of deliberately provoking a row.
Russian singer Yulia Samoylova performed in Crimea again on Tuesday, coinciding with the first Eurovision semi-final. “I think politics shouldn’t intervene,” said Liza Ignatieva, a 21-year-old university student in Moscow. “But they broke the rules of the event by not letting her in. Why they invented new rules for Russia only? Yes, we have bad relations but they shouldn’t do it to us.”
More than 10,000 have been killed in the war between Ukraine and pro-Russian fighters that erupted in 2014 following the Maidan street protests that ousted a pro-Russian president, and the annexation of Crimea.
But during Eurovision at least, Maidan and its surrounding streets have been filled with fans. Big screens and food stalls have been set up in the centre of the capital, and Ukrainian memorabilia put on sale.
“And yes, there is a war going on, but it’s further, further out,” said Stephanie Novak, a visiting fan from Australia. “And I think isn’t it the whole point of Eurovision to help bring Europe together? What could be better than bringing Europe to a country that is being so affected by war at the moment and to show them what a beautiful country it is.”