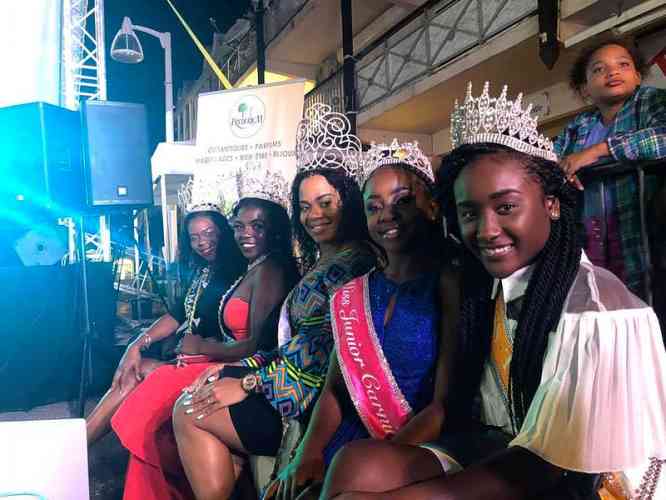 Some of the Posh Productions queens during a recent event.

PHILIPSBURG–Posh Productions has been working on introducing a new concept for St. Maarten’s fiftieth Carnival celebration this year with a theme called Queen Nation. The project is slated to kick off with the annual Causeway Jump-Up this Saturday.

As customary, reigning Queens and the current contestants will lead the jam, with the added touch of Queen Nation. The theme is a recognition platform of all former St. Maarten Carnival Queens. In alignment with celebrating Carnival, Posh is recognising former title-holders from all tier levels, according to Posh on Tuesday.

The former queens will be easily identifiable in black and gold tops bearing the official Queen Nation logo. The significance of the nation of queens is to give pride to the platform of pageantry in St. Maarten. Over the years many beautiful and successful women have held the title of “Queen.” These ladies have gone on to establish very meaningful and beautiful lives. Some are preparing for graduation, pursuing degrees, are wives, mothers, business professionals, and the list goes on.

Posh will be reintroducing these ladies via its social media pages over the next few weeks. Through photographs and biographies, St. Maarten will be reintroduced to the women who once carried the ambassadorial title of Queen for the island. The former queens will also make a grand appearance at the Miss TelCell Senior and Mature Carnival Queen Pageant at the Festival Village on Tuesday, March 26.

“While there are 100-plus former Carnival Queens, Posh has contact with more than 50 and is inviting all former Queens to register with Posh by visiting the website

www.poshsxm.com. A complete database is being created to further honour our past queens in various forms in the future,” Posh said.