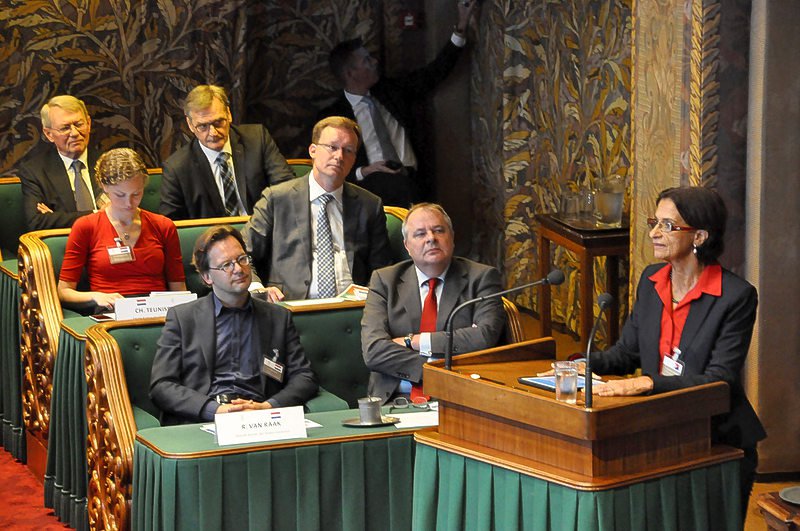 THE HAGUE–Speakers at the official opening of the Inter-Parliamentary Consultation for the Kingdom IPKO on Tuesday morning expressed the desire to arrive at a swift introduction of the Dispute Regulation (“geschillenregeling”), which would be considered the ultimate success of this week’s meetings of the four Parliaments.

Chairperson of the First Chamber of the Dutch Parliament Ankie Broekers-Knol said she was convinced that all parties were aware of the importance of establishing a procedure whereby countries of the Kingdom could resolve their disputes. Tuesday’s opening of the four-day IPKO took place at the First Chamber.

Five years have passed since the first discussions started on the setting up of a Dispute Regulation, Broekers-Knol pointed out. “In my opinion it is of utmost importance that a definite procedure be established,” she said. She pledged support once a law proposal came to the Dutch Parliament.

“We will take on our legislative activities vigorously. But more important is that we always keep working on ways to prevent disputes through continuous respect and comprehension for each other’s position, and that we keep an open dialogue. In this manner we can prevent that our relations become a legal issue and are unnecessarily pressured. Solid relations between the Parliaments of the Kingdom can contribute to this,” Broekers-Knol said.

The Dispute Regulation might have been on the agenda since 2010, but so far the discussions have not resulted in a procedure established by law, said St. Maarten delegation head St. Maarten Parliament Chairperson Sarah Wescot-Williams. “There has been insufficient progress, despite our repeated calls.”

The four Parliaments all agree that a Dispute Regulation should be introduced as soon as possible, said Wescot-Williams, who proceeded to refer to the Kingdom Dispute Regulation Law proposal of Dutch Minister of Home Affairs and Kingdom Relations Ronald Plasterk which has been made public for consultation purposes.

Plasterk’s law proposal did not coincide with the wishes of the IPKO “to put it mildly,” said Wescot-Williams. She said hopefully the four Parliaments could jointly send a “clear signal” of objection to the Kingdom Government. Standing on this issue as one was cardinal, she said. “The question is whether without that uniform support we can achieve our objective as IPKO; namely, a Dispute Regulation based on our agreed-on points of departure.”

Curaçao Parliament Chairman and leader of the Curaçao delegation Mike Franco said IPKO had contributed greatly to finding a solution for the Dispute Regulation issue. He called it “unfortunate” that the Parliaments had been unable to convince the Governments to arrive at a joint law proposal that was in line with the main principles that had been agreed on during the previous IPKO in St. Maarten in January this year. “As Parliaments we don’t have a magic wand,” he said.

Franco explained that for absence of a joint law proposal, the Dutch Caribbean countries had taken that task upon themselves. A final version of that law proposal was agreed on during Monday’s tripartite meeting between Aruba, Curaçao and St. Maarten. “Sometimes you can take big steps, but as the hill gets steeper, your steps get smaller in order to get to the top,” he said.

Franco, Aruba Parliament Chairperson and leader of the Aruba delegation Marisol Lopez-Tromp and leader of the Dutch delegation Jeroen Recourt, who chairs the Second Chamber’s Permanent Committee for Kingdom Relations, all spoke of the improved atmosphere at the recent IPKOs.

“This is a positive development, for ultimately we are all striving for a good cooperation within the Kingdom,” said Lopez-Tromp, adding that it was the task of the Parliaments to find solutions for issues that were of importance to the people, such as education, social-economic development and legal issues. She reminded her colleagues that it was important to always do so on the basis of respect and equality.

“The IPKO has earned its merits,” said Franco of Curaçao.

Recourt referred to a letter to the editor that he had read in the Dutch newspaper de Volkskrant that morning regarding racism, selfishness and lack of impulse control. “That is a very current topic in our societies,” he said.

Recourt said discussions these days quickly developed into extreme views and conflict. “That made me think of the meetings that we have as Parliaments and how well we succeeded in keeping negativity and conflicts outside. We find each other and solve things together. That makes me proud,” he said.

The IPKO meetings continue today with integrity featured on the agenda. Chairman of the Curaçao Parliament’s Committee for Kingdom Relations Elmer “Kadè” Wilsoe looked ahead at the discussions regarding this “delicate” topic. He said he expected a “fierce” debate on this issue.

“Integrity is an important, yet sensitive issue for our mutual relations. There have been concerns about the upcoming elections in Curaçao and St. Maarten in September this year. We have to take the risk factors into consideration, such as the fragile social-economic situation of the islands,” said Wilsoe, noting that it was important to talk about how the countries could reinforce each other where it pertained to checks and balances.