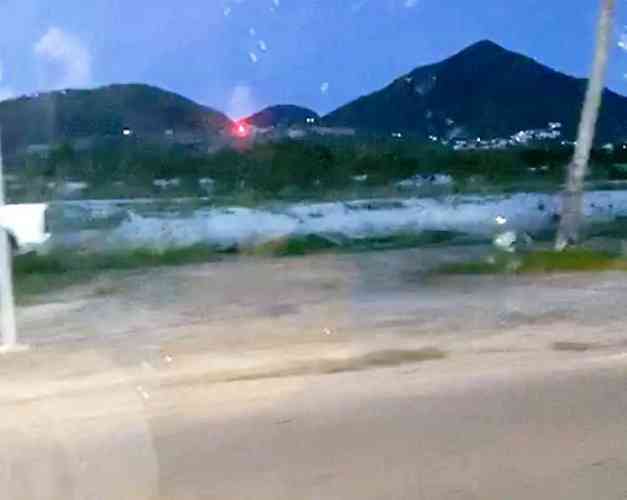 PHILIPSBURG–One day after giving a presentation on the dump to Parliament, Minister of Public Housing, Environment, Spatial Development and Infrastructure VROMI, Christopher Wever witnessed what he said in a press release appeared to have been an attempt by unknown person(s) to start a fire at the dump.

Wever, who was driving along Walter Nisbeth Road in Philipsburg around 6:30pm on Saturday, spotted a flare in the sky before it landed at the dump site.

Wever, who as VROMI Minister is responsible for the upkeep of the dump, drove to the site to investigate, it was stated in a press release on Sunday. While on his way, he alerted authorities to what he had just witnessed.

On reaching the dump, Wever and the supervisor of the company that secures the site searched to find the flare, which was still burning at the time. Buckets of water were used to put out the flare to prevent a major fire, “which was the likely intent of the person who shot it into the air just moments before,” the release said.

“The Philipsburg dump site has been a cause of concern throughout the community for a very long time,” the release said, noting that it is an eyesore, as it sits in the centre of Philipsburg and there have been numerous fires over the years, “some of which many felt were malicious.”

Wever said on Sunday: “We will find a permanent solution for the waste disposal needs on our island, but these malicious acts of lighting the dump site are counterproductive to our efforts.”

He issued a call for an investigation to determine who had fired the flare gun into the dump site.

The recently-sworn-in minister was in Parliament on Friday to speak on the agenda point “The results of a survey that had been conducted regarding fumes emanating from the dump and the health hazard these carry.” During that meeting Wever made clear that when there are no open fires at the dump, there are no real health risks for the population at large from emissions from the dump.