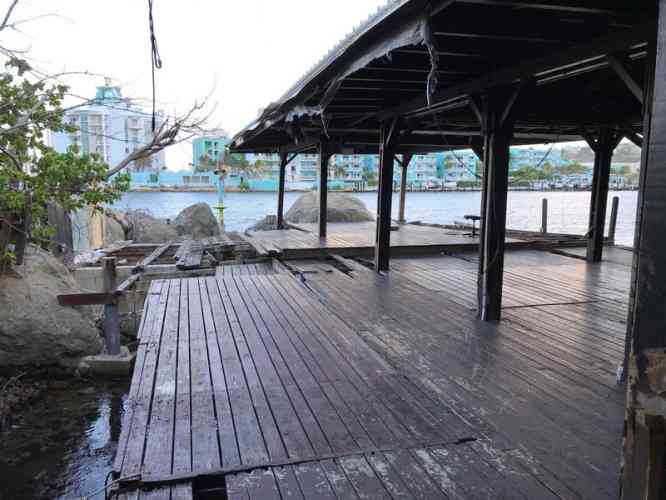 Hurricane Irma in 2017 destroyed the restaurant and marina, the adjoining hotel and most of the docks. Today, almost three years later, the hotel, restaurant and marina still remain in a ghostly abandoned state. Extensive damage to outer buildings, wooden docks and restaurant is still visible everywhere as if the hurricane passed through yesterday, a sad legacy of a once-thriving resort.

Lange’s partner Maggi Shurtleff has had the property up for sale for a few years already but, as Island Real Estate broker Arun Jagtiani explained, potential investors are put off by the unresolved border issue.

“We’ve had interested investors coming down to see the property before Irma and after Irma,” he said. “Initially the half-French-half-Dutch concept sounds attractive as a selling point, but the reality is the investor wants to know if he is on the French side or Dutch side. We have been, with the investors, to both local governments to get clarity, but we just got conflicting answers from both.”

Eventually the respective Dutch- and French-side local governments established a “status quo” while the matter was referred to the national level to sort out, in Paris and The Hague. That was years ago and a decision is still pending. Meanwhile, tourism development and much-needed hotel rooms are on hold.

Préfète Sylvie Feucher, when asked, said she did not know the current progress of negotiations on the subject between Paris and The Hague, but thought it would take a “long” time before any decision is reached.

She suggested that while Shurtleff can rebuild, as she has a building permit from the Dutch side valid until 2049, she could also submit a building permit with the Collectivité on the French side to “move the process on,” a way of breaking the deadlock. But she acknowledged the situation is delicate and complicated.

No answer could immediately be obtained from The Hague, as it is on recess and the responsible state secretary authorised to comment on the matter is on vacation.