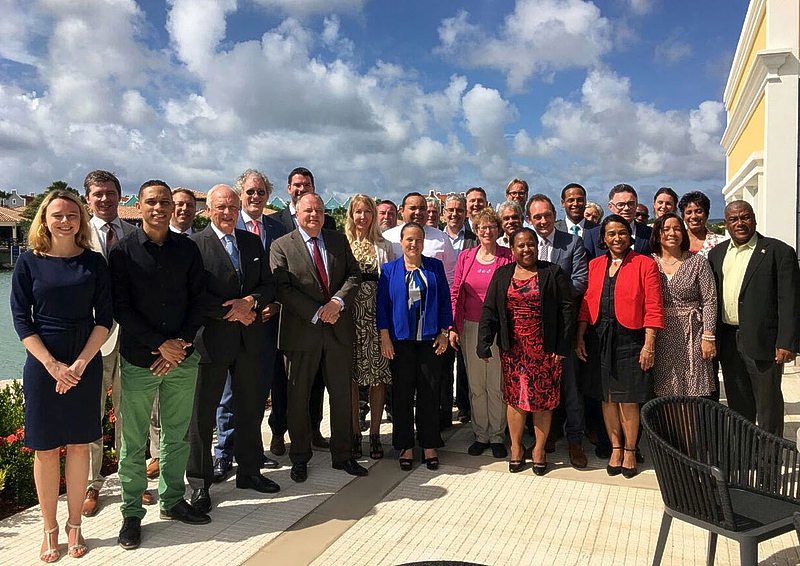 KRALENDIJK/THE HAGUE–The Caribbean Netherlands summit on poverty in Bonaire on Monday took place with the delegations of the Netherlands, Bonaire and Saba. Saba Commissioners Bruce Zagers and Rolando Wilson were absent with good reason with the island well represented by Island Secretary Tim Muller and two advisors. St. Eustatius reportedly was unable to attend due to financial supervision related restrictions.

The meeting, a follow-up to last year’s Saba Summit, took place with in attendance a delegation of ten Members of the First and Second Chamber of the Dutch Parliament, representatives of the Bonaire Executive Council and the Saba delegation consisting of Muller and advisors Piet Gerritsen and Krijn Pons.

Saba Commissioner Zagers could not attend due to earlier commitments to attend the Vacation Fair in Utrecht this week, the largest travel trade fair in Europe, and other tourism related meetings, including travel agents, in order to enhance Saba’s promotion. Zagers’ trip to the Netherlands had been arranged since October last year, way before the planning of the Bonaire summit. Saba Commissioner Wilson was unable to travel to Bonaire because he is recovering from a recent intensive knee surgery.

The absence of the Commissioners of Saba and St. Eustatius was noted, and lamented by Member of the Second Chamber Roelof van Laar of the Labour Party PvdA. He stated that it was a “pity” and called it a “missed opportunity.”

“Poverty is a major problem on the islands which is in dire need of solutions. The commitment and input of the local politicians is indispensable in this matter,” said Van Laar in a short comment on Monday.

Commissioner Wilson, who is in charge of social domain affairs, which includes poverty alleviation, did speak with the attendants of the Bonaire summit via Skype. Wilson’s effort was very much appreciated by the Dutch and Bonaire delegation.

The St. Eustatius Executive Council was not present at the summit, apparently because of the restrictions that have been imposed on the local Government for financial/budgetary reasons. The summit was informed that the Statia delegation was unable to acquire airline tickets to travel to Bonaire. Statia’s presentation for the summit was read by Bonaire Commissioner Nina den Heyer, so at least the other delegations were informed about Statia’s position and focal points regarding poverty alleviation.

The Saba delegation reported to The Daily Herald that the summit progressed in an open and constructive atmosphere. Members of the First and Second Chamber posed many questions and pressed for concrete steps to alleviate poverty on the islands.

In this sense, it was mentioned to give those islands that are ready and capable more tasks to carry out on their own. Saba was named as an example. Saba has urged for a more “Can Do” mentality where the Island Government is given the opportunity to take on more responsibilities and tasks, enabling Government to solve practical issues on its own. This “Can Do” mentality was well received by the Dutch delegation.

During the summit, the Saba delegation zoomed in on three priorities: alleviation of poverty, finances and the division of tasks. Two other priorities for Saba are economic development and a strong Government apparatus.

A tailor-made, hands-on approach is important for Saba whereby better results can be booked with relatively small measures. Saba has been clamouring for structural and sustainable solutions to alleviate poverty and to stimulate economic development.

The incidental funds provided by the Dutch Government, even though welcomed by the local Government, should become more structural and sustainable. Saba wants a more leading role in this process, with the support of the Dutch Government. Saba also aims for a more efficient use of the existing means by setting different priorities.

Saba emphasised that it is ready for new steps in cooperation with the Dutch Ministries, the Dutch Government Service for the Caribbean Netherlands RCN and other entities, taking on more responsibilities with the support of The Hague and the RCN.

Talks are already taking place between Saba and the various Dutch Ministries, and so far the feedback is positive with several steps being taken. Saba deemed the support of the Dutch Parliament important, and that is why the Dutch delegation was apprised of the island’s agenda and proposal for a different approach.

Dutch delegation leader Jeroen Recourt (PvdA) shared Van Laar’s concerns that the Saba and Statia Commissioners were unable to attend. However, their absence didn’t have an adverse effect on the summit and the discussions on the alleviation of poverty, he said in a reaction.

Recourt qualified the summit as positive. “The summit took place in an open and constructive atmosphere. It is clear that all parties have to get to work with a constructive approach,” Recourt told this newspaper. He stated that other topics were also discussed besides poverty.

The Dutch delegation will attend the Inter-Parliamentary Kingdom Consultation IPKO, which will take place in Curaçao from today, Tuesday until Friday. Delegations of the Parliaments of Aruba, Curaçao and St. Maarten will also be at the IPKO.