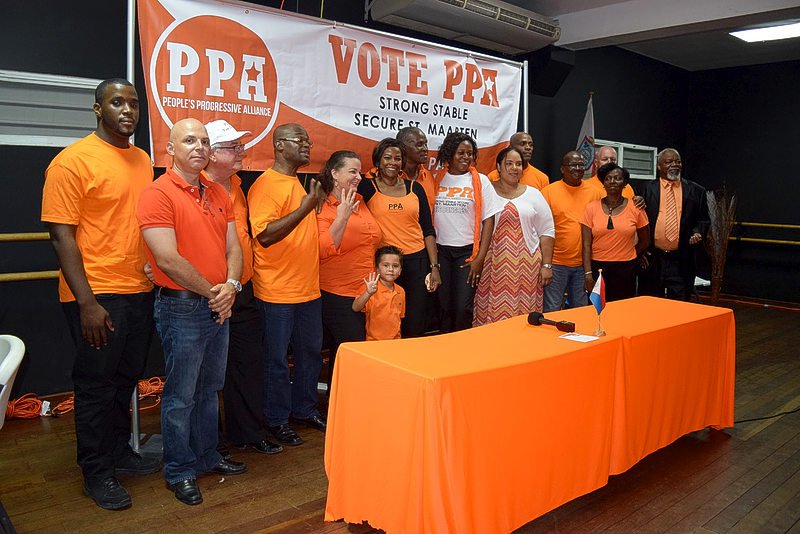 PHILIPSBURG–People’s Progressive Alliance (PPA) will contest the September 26 Parliamentary Elections with a slate of 14 candidates, who are committed to getting elected and working to make St. Maarten “strong, stable and secure.

The slate is headed by former Member of Parliament (MP) Gracita Arrindell.

The orange party introduced its slate at John Larmonie Centre on Sunday afternoon, ahead of Nomination Day, today, Monday.

Arrindell called her fellow candidates “the true heroes” of St. Maarten, because they chose to stand up for St. Maarten and make things happen for the country and its people.

In the number two spot is casino controller Philip van Delden. Like Arrindell, he was a past candidate on the United People’s (UP) party slate. Van Delden said he’s running “to bring back respect to St. Maarten” and empower people of the country by allowing them to learn employable skills.

Leader of Concordia Political Alliance (CPA) Jeffrey Richardson is the party’s number three. His party merged with PPA two weeks ago to contest the elections.

Ophthalmologist Armando Gumbs is at number eight and businesswoman Angelina Williams-James is at nine, followed by Shipping Agent Frendsel Rimon at 10 and midwife Regina Janga in the 11th spot.

Assistant manager Don Hughes Jr. holds the number twelve spot. At age 22, he is one of the youngest candidates in the elections.

Five of the 14 PPA candidates are women. One of them, DayDay-Halley called on voters “not to get fooled by empty promises” and make the best choice for St. Maarten as PPA is.

Arrindell encouraged voters to head to the Civil Registry on Tuesday to endorse the PPA list, between 9:00am and 4:00pm. PPA, as a party without a seat in the current Parliament, must get the signatures of 146 voters to be on the September 26 ballot.

The party hopes to maintain its colour – orange – on August 22, when the Main Voting Bureau sits to number the lists on the ballot and assign party colours to the new parties.