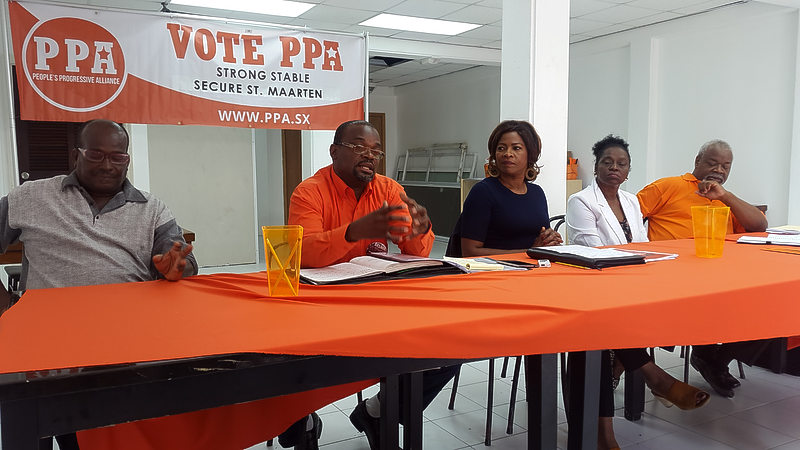 CPA leader Jeffrey Richardson announced the merger on Monday together with PPA leader former Member of Parliament Gracita Arrindell at a press conference at PPA headquarters on Front Street.

This merger means there now will be nine parties on the ballot come Election Day. Fourteen parties are registered with the Electoral Council and three of those already merged with other parties several weeks ago.

Richardson said PPA’s vision, manifesto and the strength of its leader were among the things that had tipped the scale in favour of CPA’s choosing PPA. “We are on the same wavelength,” said Richardson, adding that he had spoken to other party leaders, but none had the right fit.

Merging “to be stronger” in the elections was also a reason for the move. Richardson said that with some 10 parties contesting the elections, voters could become confused, so banding together “was the best way forward.”

Arrindell welcomed CPA and its candidates under the PPA banner. She described Richardson as hard-working and committed. “He is a warrior,” she said.

All candidates will work together to achieve “a strong, stable, secure St. Maarten” – the slogan of PPA. The PPA slate is “strong.”

Together, Richardson and Arrindell have vowed to take care of “the small man” of the country. St. Maarten is in “a critical condition” and needs to be properly taken care of to survive, said Richardson.

Richardson will run as PPA’s number three candidate, following Arrindell and Philip van Delden on the slate. Two other CPA candidates on the orange list are Frensel Rimon and Regina Janga. Janga had contested the 2014 Parliamentary Elections with One St. Maarten Party (OSPP). Also on the slate for PPA is Ed Gumbs.

Richardson as a party leader said he was content to run in the number three spot. The elections are not about self, he said. Another reason for this placement on the slate is that PPA already had its candidates in place by the time the merger was birthed.