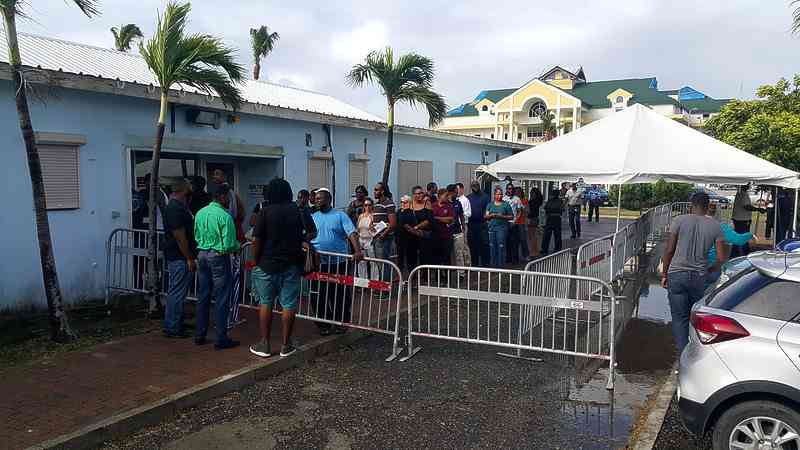 POND ISLAND–The People’s Progressive Alliance (PPA) was the only party of four not to garner the 142 signatures required from registered voters to make it onto the ballot for February 26 snap parliamentary elections. But, the orange party will get another try on next Monday.

PPA received 86 endorsement signatures, 56 short of number representing one per cent of the valid ballots cast in the 2016 snap elections.
Party leader former Member of Parliament (MP) Gracita Arrindell said, many of the party’s supporters could not get time off to head over to the old Civil Registry Building on Pond Island to sign the endorsement list. “It is not like election day when you get time off to vote.”

However, not getting all the signatures in one go “doesn’t say anything” about the voters’ interest in the party, she said.
“You don’t waste time to assume,” she told the press after the final tally was announced by the Civil Registry Department. “When you think you are the underdog, you just continue to fight for what is right … I am confident we will get on the ballot.”
Fellow PPA candidate Susanna “Suzy” Velasquez told the newspaper the set hours of 9:00am to 4:00pm is “not good for the working class … the process should be made easier, because not everyone works for government.”

Her recommendation was for the endorsement times to be broken down into different shift to allow shift workers the opportunity to be part of the process.
Assured a place on the ballot, following the endorsement, St. Maarten Development Movement (SDM) with 194 signatures, St. Maarten Christian Party (SMCP) with 189 and the United Democrats (268).

Throughout the day, parties representatives and supporters gathered outside the building. They chatted with each others, traded a few verbal jabs and were in general good spirits as is the trademark of St. Maarten elections and politics.
People who came to sign gathered outside and were let into the building in small batches at the time to limit congestion and to keep the steady flow to the four windows available for signatures.

All four lists were available at each window giving the voter some anonymity in their choice of party. A voter had to produce an identification card or passport at the window to a Civil Registry staff to verify he or she was duly inscribed in the voters registry before the voter’s preferred list was given to them.

The parties were given periodic updates on the endorsement count by the Civil Registry or Central Voting Bureau representatives throughout the day. This gave the parties lagging behind the opportunity to rally supporters to boost their count.
The endorsement process started 10 minutes late due to flooding in the hurricane-damaged building. Those minutes were given back to parties by the extension of the endorsement time to 4:10pm, instead of the 4:00pm close off. At closing time only representatives of SDM, SMCP and PPA were still present outside the building. The United Democrats had already moved on to campaigning having surpassed the 142 quota at 1:00pm.

The four parties needed the endorsements, because they do not have one or more seats in the current Parliament. United Democrats, although having eight MPs on its slate had to get signatures as those MPs were elected on different parties’ slates.
The National Alliance (NA) and the United St. Maarten Party (US Party) did not require endorsements. Both parties have sitting MPs.

All six parties contesting the upcoming elections will be informed by the Central Voting Bureau on Friday whether they have errors on their slates and supporting documents submitted on Nomination Day, January 5. In the case of PPA, not garnering the needed signatures is considered under the law an error that can be corrected. PPA and any other party for list/document related errors will be given three days to correct these.
The country heads into its second snap elections on some 16 months due to the shifting of the majority in Parliament. Faced with broken coalition and loss of support in the legislature, the NA-led government issued a decree to desolve Parliament and call fresh elections.