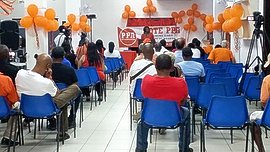 PPA joined forces with the United People’s (UP) party in the 2014 election, but will be contesting the upcoming election on its own. During the congress a new party board was elected, which now consists of party president Don Hughes, treasurer Ed Gumbs, secretary Yuklin Page and members Nathalie van Delden, Don Hughes Jr. and Clive Webster.

In her speech during the first PPA convention, Arrindell told supporters her party is “shaping a positive future for St. Maarten and its people.”

Picturing St. Maarten 10 years from now, Arrindell said “economic standstill, apathy, fear -perceived or real-, are no options, because it makes the lives of our citizens even more difficult, especially in uncertain times.”

In referring to the European soccer championships, she said the only way for “Team PPA” to be successful and win the upcoming election is to have a good strategy, supported with great leadership that can be trusted. “Without that strategy, the centre forward or the midfielders don’t know what to do and where to run. They will get frustrated despite their efforts. They may get personal, they refuse to cooperate, they get disgusted or even leave the team in the middle of the game with all consequences thereof for them and for the team,” the PPA leader warned.

Arrindell said her party is fully aware that contesting the election under its own umbrella after six years will not be an easy task. The party would need some 5,000 votes for its programmes to be implemented in a “stable” government, she predicted.

Arrindell said St. Maarten needs a plan, a compass and a roadmap for the future. PPA’s plans include dealing with the environmental hazards surrounding the sanitary landfill, the dump, which was called a “ticking bomb.”

The party advocates lower prices of basic needs such as water, food, energy and health, as well as affordable housing. “The future of energy is affordable, clean, stable, and secure,” said Arrindell in referring to the recent spate of power outages.

Education, increased entrepreneurship and changes to the tax policy were mentioned as instruments to “contest” the imbalance of income distribution.

With regard to tourism, PPA goes for quality and “smart strategies” such as providing a solution for the traffic congestion around Simpson Bay. Innovation in agriculture, cheap and sustainable energy, the involvement of youngsters and dropouts in the marine industry, are also part of the party’s wish list, as well as “better broadband and getting rid of ridiculous high prices for telecommunication.”

Where social security is concerned, “the old-age pension requires an analysis to make it sustainable,” and in health the focus should be on prevention, according to the PPA.

The PPA leader warned her audience to not let anyone hijack their future based on false promises and quicksand policies. To those over 60 she said a “quality lifetime” awaits them under a PPA government. “You have paid your dues to society and deserve to be treated with respect, dignity, love, tolerance and appreciation for our past contribution to our society. Too many of us, -Yes, I’m in that bracket-, still experience indifference, disrespect and intolerance on a daily basis,”Arrindell stated.

She called upon people not to stay at home or to vote blank or to vote for “empty promises and leaders with no backbone,” but to vote for the “clear vision and inclusive” PPA programme, “which offers a bright future for the people of St. Maarten.

“We are fully aware of the distrust and dislike about local politics and politicians. The PPA, its leader and its candidates will do everything in our power to regain and earn that trust. We ask you who feel disillusioned and tired of the empty promises, lies and deceit to please give this country we all love a chance to regain its posture and become a happy, friendly, secure, stable place for you and for our children” the PPA leader said.

October 3, 2022
1
Alida Francis in a backhoe bringing down the shovel.   ST. EUSTATIUS--A ground-breaking ceremony was held for the first phase of the Airport Boulevard project on...