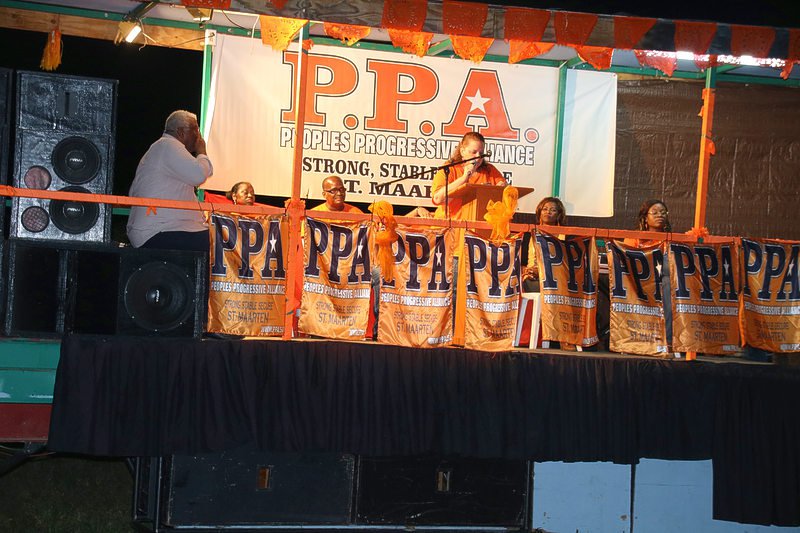 COLE BAY–People’s Progressive Alliance (PPA) is determined that the electorate will vote for a change and elect a number of its candidates to parliament when voters go to the polls today, Monday.

With a slate of 14 candidates, who are committed to getting elected and working to make St. Maarten “strong, stable and secure”, the party is hosting its final public meeting on Union Road on Friday evening. The slate is headed by former Member of Parliament (MP) Gracita Arrindell.

Arrindell called on the population to make the right decision when going to the polls, and consider her party and fellow candidates to represent them, and give them a voice in parliament.

Casino controller Philip van Delden said the people had enough of instability and the change has to come now. Arrindell focused on the population not having a voice in the present parliament. “With the PPA, you always win, and we include you in every step,” stated Arrindell.

Arrindell encouraged voters to head to the polls early, and for voters to give her party a chance to prove that a PPA-led government is a government for the people of St. Maarten. “People know, based on my experience when I was in parliament, I am a hard worker and this is the time to turn things around.

“Most parties, when they receive your vote, after elections you do not hear anything from them, but with the PPA, we will bring back transparency and openness to government,” added Arrindell. She also thanked Gunter Pauli, the founder of “The Blue Economy” concept, who spoke about his successful economic model on September 20 during a lecture.

She said the “Blue Economy” successes are in re-energizing small, medium and large businesses and whole economies. And once explained clearly, it will work as a game-changer in St. Maarten. Pauli will be invited again, once elected, said Arrindell. PPA will work on immediate solutions to get hundreds of jobs for the unemployed on St. Maarten.

With an unacceptable high-unemployment rate of around 25 to 30% among the youth, and under-employment among women, it is certainly worthwhile to consider and apply this model. If we truly want to generate prosperity for all, we must get off the beaten path, work together with local stakeholders, supported with international transparent experience, to create new jobs for and by our people.

It will be exciting to realize how a successful model can transform our island and the life of our people, including our young people, to a level of development that we have never experienced before,” said Arrindell.

”If we want to create a better government, a better economy, and a better society, it will require taking a completely different approach in how we want to solve many of the long- lingering issues on our beautiful island. This is the reason the electorate should consider PPA for government when going to vote today, Monday,” said Gracita Arrindell.