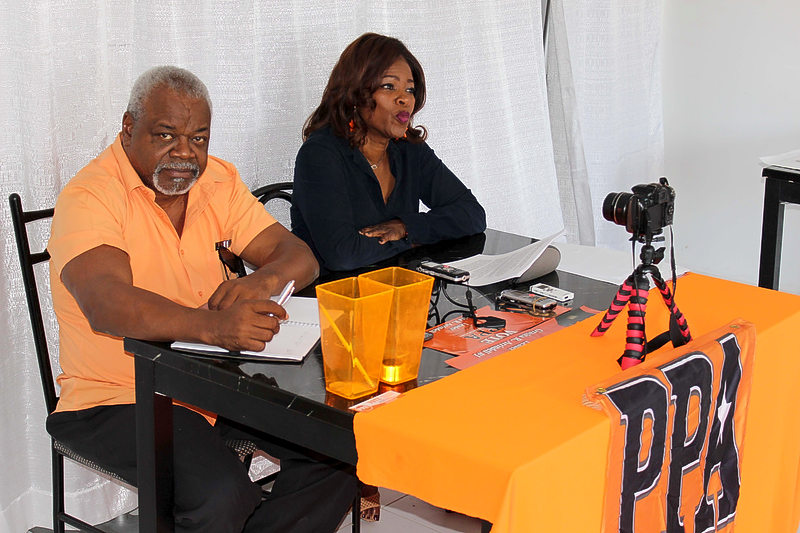 PHILIPSBURG–People’s Progressive Alliance (PPA) leader Gracita Arrindell held her first press conference for the year at the party’s headquarters in Philipsburg on Thursday.

She was joined by party member Edwin Gumbs and gave insight on the way forward for her party. She also spoke about issues relating to the community and her party’s stance on those issues.

The party’s main objective is the development and wellbeing of the island. Arrindell hopes that the current Government will stay for the four-year full term.

“In 2003 PPA was first elected into the then Island Council. I stated in an address that there is no cause for pride or self-satisfaction when many of our people cannot be part of nor enjoy the economic benefits of the island, while few continue to grow and prosper.

“There is no cause for happiness or self-gloating when the social division amongst our people is increasing while morality and respect for each other and our differences are declining,” said Arrindell, a former President of Parliament

She said she had stated that back in 2003 and this quote was still relevant to date. She went on to mention that between 2010 and 2015, based on numerous overlapping reports (including Transparency International, OECD, several Integrity committees, and St. Maarten institutions such as the General Audit Chamber) 60 per cent of people living on the island earn just around the minimum wage and 75 per cent are in poverty.

“Youth unemployment remains high and the six-month contract is still in Parliament, to mention a few. I can understand why many have lost faith in the capacity of our political leadership to make life better for our people and future generations to come.” said Arrindell.

She believes the island must move forward, drawing from her own experiences of the past while keeping a keen eye on the future. “We are here today, battered and bruised, yet hopeful and determined to make that difference. There are many good people out there who want to give up. To them I say, ‘please do not walk away from this beautiful island, this is your home,” ‘she said.

The PPA board is preparing to submit its annual report before April 1, 2017. It also plans to host meetings in the community in April to re-establish connections through information, including grass roots talks. Education, budget laws in Parliament and business concerns will be discussed.

“We will continue our explanation about the Blue Economy concept which was introduced to the island last September with the visit of Professor Gunther Pauli. The lecture did not have a large crowd. However, those who came in spite of their political affiliation were pleasantly surprised,” she said.

She also said, “The constant GEBE outages in spite of promises to provide better service need an off-grid solution backup system. We have been talking and hearing about this for decades. By the end of this year the people of St. Maarten must receive a clear response from Government regarding the waste-to-energy proposal once and for all. The reports are there. Submit the top two solutions and hold public meetings about it.”

She said the traffic situation continues to be a huge challenge. PPA wants Government to introduce electrical cars and pumps. There is also an idea of having one giant roundabout from the new causeway bridge throughout Simpson Bay and Cole Bay, but she gave out no additional information about the plan.

Removing the sanitary landfill also came up in the press conference. Steps should be taken by the current Government to remove the landfill as soon as possible, as it is still a ticking time bomb, according to Arrindell.

The party will go back to its core and have dialogue with the people, and hopes Government will be open to the party’s many ideas.