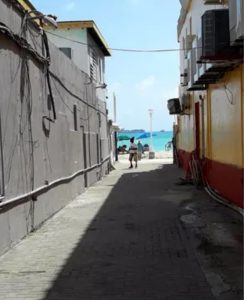 PHILIPSBURG–The Philipsburg Promotional Board (PPB) has adopted its second alley in Philipsburg, Pastoor Steeg, and it is hoping that businesses in the country’s capital adopt the remaining ones so that together the alleys can be enhanced and made more inviting.

This is one of the goals of PPB, which is currently celebrating its first anniversary. President Valentin Davis said PPB will be enhancing Pastoor Steeg to “give it a better environmental feeling” and make it “pleasant” to walk through. The intention is to elevate the feel of the alley and create an inviting atmosphere.

PPB has identified a total of 44 alleys connecting Back Street, Front Street and Boardwalk Boulevard and its intention is for businesses to adopt them and spruce them up. A committee will be formed and PPB is hoping to work with businesses to enhance the alleys. He said instead of waiting on Government to do everything, PPB wants to take the initiative to have the environs in Philipsburg spruced up.

Pastoor Steeg is the second alley the PPB has adopted. Earlier this year, in collaboration with SXM DOET, the board adopted Apotheek Steeg (formerly Fish Alley) and transformed that alley with the help of several volunteers into a much more attractive walking path to Boardwalk Boulevard.

“The board is currently inviting private and corporate citizens to adopt one or more of the 44 alleys in Philipsburg and help enhance the environment of the capital. The board has also influenced Government into designing and approving plans for a Green Zone and new taxi holding area in the capital. PPB has also proposed to Government that an ideal way of enhancing and managing the island’s capital is to appoint a City Manager that would also affect economic growth,” Davis said.

In addition to the “Adopt an Alley” initiative, other projects promoted by PPB over the past year include Koopavond (sales evening), its Christmas lighting project, central valet parking, having St. Maarten faces and history on store shutters, having a Friendly Island longest dining table; making Philipsburg pedestrian-friendly and proper waste management in town.

In celebration of its first anniversary, PPB is hoping to hold a “block party” in Philipsburg in May, just after Carnival has ended, to bring more people to the country’s capital for a fun evening out. A committee is still to put together the details of this initiative, but Davis said his vision is for persons in the arts and craft field to be invited to display their products for sale during the event and for restaurants in Philipsburg to open to serve patrons who attend.

The Board has initiated several projects over the past year, the first of which was executing a three-part business survey in the summer of 2017. The findings of the survey provided “significant information” on some of the challenges that retail establishments, hotels, casinos and food outlets have been experiencing.

For the survey conducted by PPB’s Economic Council, 150 questionnaires with 20 questions were sent out and there was 75 per cent participation. “There were varying responses to the questions. However, the need for parking, more lighting and improved security topped the list,” Davis said.

In an effort to expand its influence and partnership with stakeholders, non-governmental organisations (NGOs) and Government, the seven-member PPB board will be adding two new members to its composition: a hotelier from Philipsburg and an attorney.
Davis said the Board welcomes individuals from the private sector to participate in its various committees: Economic Council; Security and Safety Task Force; Entertainment and Nightlife Commission; Hospitality and Branding Committee; and the Philipsburg Investment Initiative Committee.

The Board said it has had some setbacks caused by Hurricane Irma. However, it noted that the hurricane has brought more public awareness to PPB’s quest to enhance Philipsburg.
“One of the board’s essential discoveries in its business tours around town is the importance and need for the country to utilise land-based tourists and residents to influence the much-needed economic growth in the capital. Economic opportunities also exist for property owners to invest in [if they – Ed.] convert their beachfront properties into boutique hotels and villas for short-term rentals,” Davis said.

PPB was born a year ago after discussions amongst businesses about the deteriorating state of the infrastructure and economy in Philipsburg. Now celebrating its first anniversary as an active board, PPB has been lobbying and making promotions for improvements in the country’s capital.

“There is much to be done, but so far we have been successful in creating a greater awareness of the many needs in the capital that are required for the satisfaction of both residents and tourists alike to enjoy shopping and socialising in the island’s main commercial area,” Davis said.

PPB, which consists of professionals and business entrepreneurs, has met on many occasions with several Ministers and stakeholders such as the Council of Churches, business groups, TelEm Group, United Telecommunications Services (UTS), utilities company GEBE, St. Maarten Chamber of Commerce and Industry (COCI) and Princess Juliana International Airport (PJIA), amongst others, to create awareness and establish broad-based support for PPB with the aim of rebranding Philipsburg.
PPB encourages public support and says residents can post their ideas and suggestions on PPB’s Facebook page.

“The board’s main goal is to strategize ideas with Government and the capital’s businesses to stimulate the day economy and regenerate the night economy. This will improve turnover in retail establishments, bars, restaurants, casinos and hotels, etc., which would also encourage family and friends to meet in the capital to attend church and other events, bringing financial benefits as a sense of wellbeing to Philipsburg,” Davis said.
“As our capital, we need to get the basics right. Employees, visitors, customers and residents should all feel welcome, safe and secure when they are in the capital.”