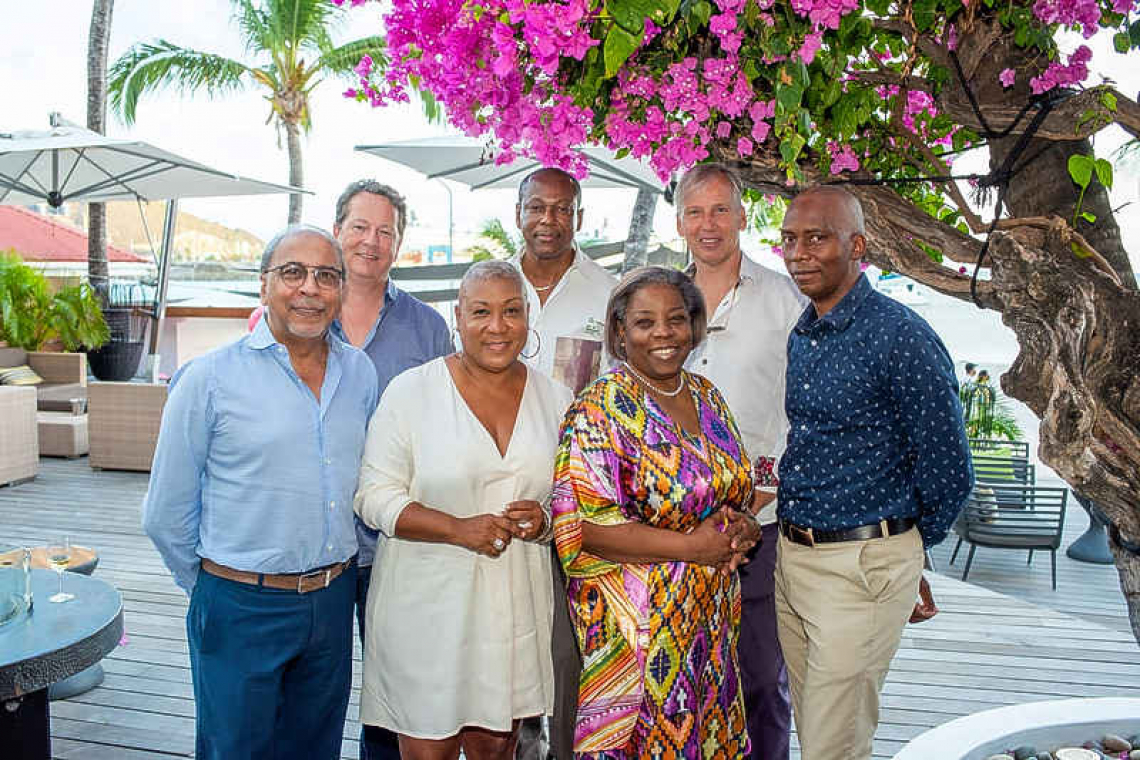 PHILIPSBURG–The Philipsburg Promotional Board (PPB) is hoping that much-needed improvements will be made to Philipsburg now that it has presented a 37-point “wish list” of improvements it would like to see executed in the country’s capital to Public Housing, Spatial Planning, Environment and Infrastructure VROMI Minister Egbert Doran.

The list was presented during a recent meeting with the minister and some members of his senior staff. PPB told The Daily Herald it had held fruitful discussions with the minister and his team on infrastructure improvements needed to enhance Philipsburg to become more pedestrian-friendly and to influence growth in its day- and night-time economy. Doran was very receptive and was ready to mobilise his ministry to enhance the capital for the enjoyment of residents and visitors, PPB said.

The list included installing more handicap ramps around town; completing the many open trenches on sidewalks; removing loose sand from old planters on sidewalks, which causes pedestrians to skid and fall; removing the steel threaded part from sidewalks; increasing the height of traffic signs in certain areas; removing electrical, telephone lines and conduits from sidewalks; making the level of the main road even; removing the chain-link at D.C. Steeg and Cyrus Wathey Square; removing broken and fallen bollards from sidewalks and emptying garbage bins in a timelier manner.

Other items on the wish list include enforcing the traffic code by having the police not allow parking on sidewalks; lobbying Parliament to increase the penalty for parking on sidewalks; reviewing the policy of businesses placing signboards on the sidewalks, which have become obtrusive and cause pedestrians to bump into each other trying to manoeuvre around them; removing large concrete light-poles which are placed in the centre of sidewalks; making garbage bins stationary; installing and maintaining more pedestrian road crossings along with signage throughout Philipsburg; having buildings and store-owners place their air-conditioning units’ water-lines into the ground in drain fields instead of on the road; enforcing proper and professional placement of construction barriers for the safety of pedestrians; enforcing “No Vehicles Parking” in non-drive-through alleys; prohibiting merchants from placing garbage bags, boxes and debris on the sidewalks, alleys and streets; educating restaurants on disposal of cooking oil and having penalties for spillage in public areas; having all alleys connecting from Cannegieter Street to Back Street, Front Street and Boardwalk Boulevard properly illuminated, as several of the 44 alleys in Philipsburg are without any light since Hurricane Irma; and maintaining access to parking lots throughout the evening and night hours in front of the Chamber of Commerce and Ombudsman offices, which are locked at night.

During the meeting, PPB also suggested having a city manager for the capital and was informed that legislation was being developed to introduce such a position.

PPB said Doran and his urban planner were ecstatic about a housing project being built at the old Government Building and believe that bringing more people to live in Philipsburg will help the capital do better economically.

PPB said that with Philipsburg being located in a basin surrounded by thousands of people residing in Pointe Blanche, Guana Bay, Oyster Pond, Cul de Sac, Little Bay, Bel Air and other areas, residents will be eager to frequent the capital, which should be enhanced and made pedestrian-friendly, safe and attractive.

PPB emphasised the need to establish a parking authority to research, review, manage and invest in parking around the capital. “Such an entity would develop a comprehensive plan for parking throughout Philipsburg, while completing an analysis of the economic impact in the various sections of the capital,” PPB said. It was suggested to pre-sell some parking-garage units, as this can be an easy way of funding such parking complexes.

“We informed the minister that our aim is more than fixing sidewalks and replacing light bulbs, but about growing the economy by attracting foot traffic for greater sales in the stores, bars, restaurants, and higher hotel occupancy in Philipsburg. We spoke about the importance of Clem Labega Square to the economy of Philipsburg to allow greater turnover in the businesses or persons wanting to do quick banking or insurance affairs,” said PPB.

“However, the parking lot is full by 8:30am with everyone working until the end of the day. On average, people would want to use the parking lot for two hours. However, it being full all day deters use for growing the economy of the capital. The economic impact of the parking being in darkness at night was also mentioned.”

PPB said Doran had indicated that Front Street has his attention and his ministry was studying ways to improve the street in an efficient way with proper drainage for it to be sustainable for a longer period.

“The minister was very open and eager to hear and discuss the various points with us. He indicated interest in having a follow-up meeting very soon,” PPB said, adding that a “thank you” letter had been sent to the minister for his time and for the fruitful talks. PPB invited Doran to have a drive through Philipsburg for the next meeting.