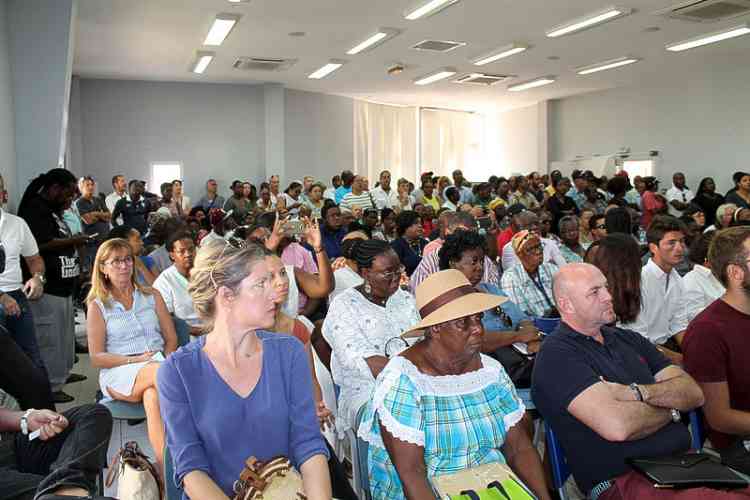 The audience packed into the Chamber of Commerce conference room before the meeting was cancelled. (Robert Luckock photo)

MARIGOT–What was supposed to be a very important second public meeting for the Plan Prevention des Risques Naturels (PPRN) in the Chamber of Commerce, Concordia, Tuesday morning was called off after just thirty minutes when the audience demanded a bigger venue, among other complaints.

Clearly the Chamber’s conference room was totally inadequate for the meeting when hundreds turned up, most having missed the first meeting which was poorly communicated to the public. Just a dozen or so attended that first meeting.

With all available chairs used up, it was standing room only at the back with more people outside. The meeting got off to a bad start when people at the back could not hear, followed by complaints the room was not big enough and there was no English translation. Others complained there was no official representation from the Collectivité to defend the people against what the State wants to impose for St. Martin.

Chamber of Commerce President Angèle Dormoy suggested the meeting be cancelled and not entered into record as the “second” meeting, but a new second meeting in a different location will be proposed. This was accepted by the audience, but they were still in two minds about staying or leaving. Préfecture Secretary-General Mikaël Dore tried to keep order but the audience was not having it, and the presenters agreed to cancel the meeting.

“Only the State was present for this meeting and not the Collectivité, when it is supposed to be a joint action,” complained Joselyne Arnell. “The Collectivité is not taking its responsibility and they are supposed to be here today to represent what the people want. And we are not accepting this location that cannot receive the total population. So, we are saying they still owe us two public meetings.”

Collectivité Vice-President Steven Patrick, who is in charge of urban planning, said he was at the meeting as a citizen, not representing the Collectivité. He reminded that environment is the competence of the State, not the Collectivité, which is why the PPRN is being presented by the State. He questioned why the State could not collaborate with the Collectivité to protect “way of life, economy, heritage, property”, saying it is a stand the Collectivité will take.

He said he could not comment on elements of the PPRN that had been decided without collaboration of the Collectivité. In addition, the Préfecture wants to rush through some changes to be enforced in July for this hurricane season.

“The State has taken a year and a half to come up with this plan and now we (Collectivité) are being asked to validate it these changes within two months, said Patrick. “But we need time to study it and understand it.

“The State cannot assume, just because administratively they have the legal right and competences, that they can unilaterally apply it like that and disregard the local population. The State assumes we are in a position of weakness and that we will accept it without question. The State talks about a partnership, but you have to ask yourself if it is really a partnership.”

In any event, the Territorial Council has to validate the PPRN; otherwise, it cannot be implemented, Patrick said.

“The bottom line is that it is about safety precautions for the population, but the State cannot decide that for us. We have major concerns about it. It has to be revised in a way to be adapted for the reality of St. Martin. We have to work together to come up with a document acceptable to all.”