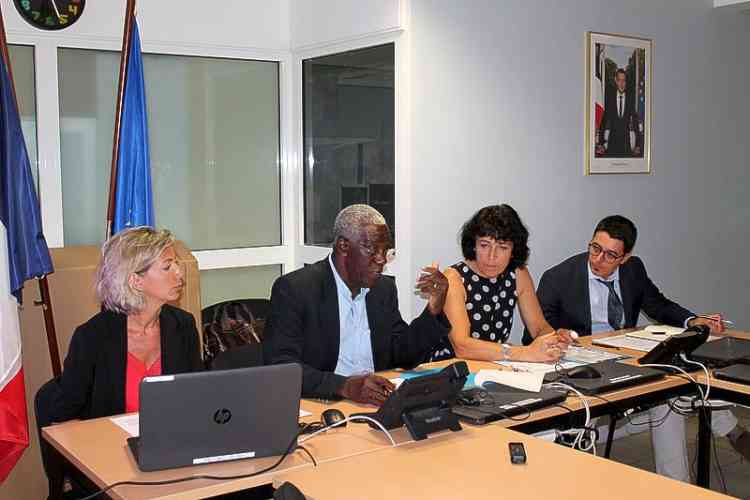 MARIGOT–Préfète Déléguée Sylvie Feucher convened a press conference Monday to discuss the readiness of the territory ahead of another hurricane season starting June 1 and to advise the population on the usual preparations to be taken in case of a hurricane threat.

Seven hurricane shelters to accommodate 1,500 persons will be available. They are Evelina Halley School (210), Hervé Williams School (170), Emile Choisy School (200), Marie Antoinette Richards School (100), Cité Scolaire (360), ASMT (200) and Clair Saint-Maximin School (260). The advice is to proceed to a shelter when a RED alert is announced.

Director of the Collectivité’s Natural Risks Management Department Charlotte Terrac noted that shelters are not located in all the districts due to flooding risks. The Collectivité has made shuttles available to take inhabitants to the shelter nearest their home. The shelters will be pre-equipped with supplies.

Regarding the SMS text messaging alert system introduced last year, Terrac said only 544 persons have subscribed to this service which permits important pre-hurricane information to be received on a mobile phone. Communication is otherwise transmitted by radio stations or newspapers. A megaphone system will also be used.

The authorities urge more people to register for the SMS alert, which can be done by going on the Collectivité’s website

www.com-saint-martin.fr/alerte-sms or downloading it from the My Saint Martin application.

Vice-President Yawo Nyuiadzi said a clean-up operation of the territory will take place in June.

“Every citizen must be involved” he said. “We will make skips available in the neighbourhoods and also on request, so I hope that everyone will become aware of the issues and get involved as soon as possible in this collective cleaning. Citizens also have a role to play in cleaning of their properties, the safety of family, gathering the reserves need for an emergency kit, and organising with family and friends the action to take in case of a hurricane threat.

“I also want to reassure the public that the shelters are reliable and safe and to prove it, we will have the safety of these shelters assessed by building experts in June. I remind you that our shelters are pre-equipped with essential supplies and will be open at the time of a RED alert.

“The objective for the State and the Collectivité is to guarantee the security of our fellow citizens. The public authorities have therefore mobilised, organised and structured themselves to be able to respond to a phenomenon on the scale of [Hurricane – Ed.] Irma, even if we all hope that it will not happen again. We all know that there is no such thing as zero risk, but we also know that preparation and anticipation are key. We are responsible for our own security and must therefore develop a risk culture.”

Préfète Feucher said preparedness meetings will be conducted with entities such as the port, airport, health authority, Gendarmerie, Police, aid agencies such as Red Cross, electricity company EDF and the Water Authority in the coming weeks. She also said an agreement on mutual cooperation and exchange of information with the Dutch side will be signed in October.