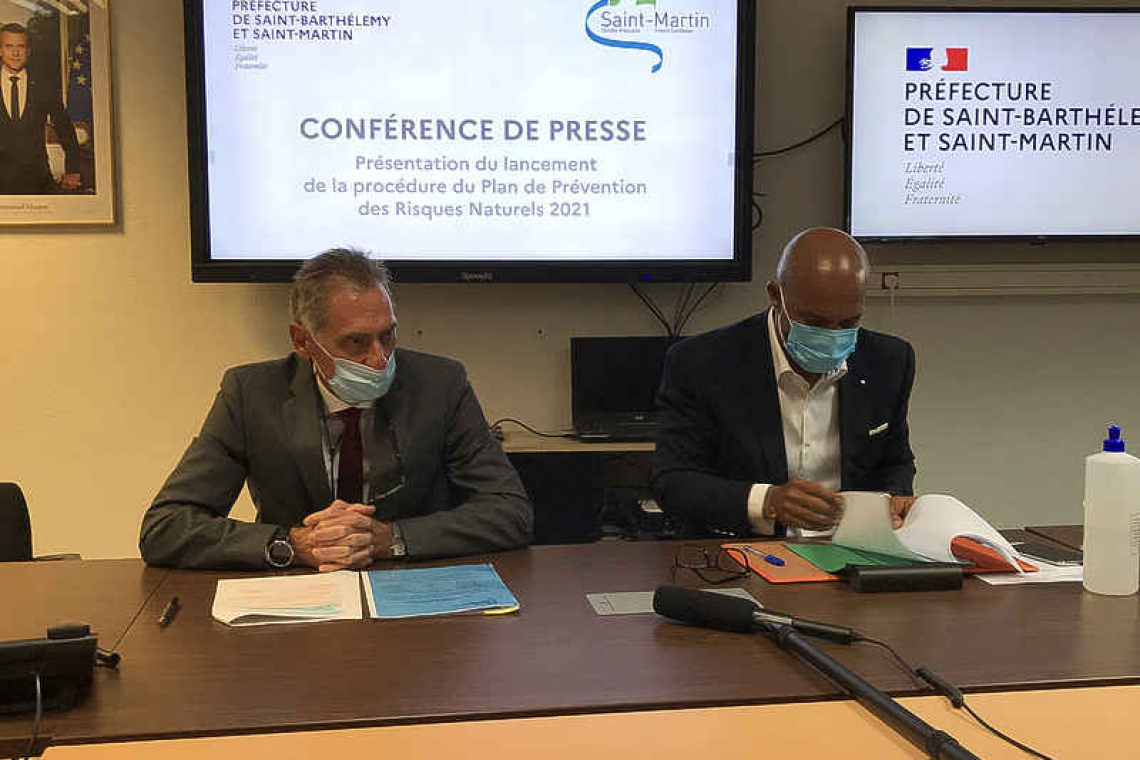 MARIGOT–Préfet Délégué Serge Gouteyron on Tuesday relaunched the public consultations schedule in the districts for May, a mandatory procedure towards finalising the new natural risks prevention plan PPRN.

It will now be based on the 2011 version adapted to include the consequences of Hurricane Irma and will include the approved recommendations made by the Lacroix Mission last year.

President Daniel Gibbs and the Préfet will make two radio appearances together on Radio St Martin 101.5FM at 9:00am Wednesday, April 14, and on SOS Radio 95.9FM at 9:30am Thursday, April 15, to explain to residents the process going forward.

Gouteyron assured at the press conference that the PPRN will not be a “variant” of the 2019 PPRN and that consultations will be “open, transparent, and understandable.” He denied that four months was too short a time to finalise the document before the hurricane season, as technical work behind the scenes on preparing the document by the Directorate of the Environment DEAL had never stopped, despite the turbulent events of 2019.

Gibbs confirmed the Collectivité will be fully involved in elaborating the PPRN, in public consultation meetings and with the Préfecture services. He insisted there will be no political influence or strategy.

He said authorisation to rebuild in red zones (Lacroix report) now allows the elaboration of regulations to proceed in line with the reality of the territory and the expectations of the inhabitants.

“We are moving forward effectively so that St. Martin has a revised PPRN, understood and accepted by all; a clarified and consensual PPRN,” he said.

Gibbs recalled that in 2019, the PPRN by anticipation had consisted of making immediately applicable only part of the provisions of Article L562-2 of the Environmental Code, which only concerns new construction projects, not the reconstruction or restoration of buildings damaged or destroyed by Irma.

The Collectivité then decided to defend the interests of the people of St. Martin before the court by requesting cancellation of the PPRN of 2019. The legal validity of the PPRN by anticipation has been the subject of different interpretations by the administrative court of St. Martin on the one hand, and then by the Court of Appeal of Bordeaux, on March 30, 2021.

“On this specific point, I would say that it will now be up to the Council of State to decide the interpretation,” said Gibbs. “In addition to the judicial follow-up of the case, the Collectivité has always shown its good faith and I insist on this point because my services have participated in several technical meetings on the elaboration of the new PPRN with the teams of the DEAL and the State, because we have always favoured the interest of St. Martin and its inhabitants”.

He said the Lacroix-Desbouis report made it possible to clarify the stumbling blocks, which provided a solid basis for working on the points identified in the report to develop the new PPRN.

“I sincerely believe that, based on this work, we will be able not only to draw up a document that protects the population living on the coast, but also to respond to the legitimate concerns of our fellow citizens who want to be able to continue to live according to the customs and traditions of St. Martin.

“The regulations require us to draw up a PPRN and it is our duty, the State as well as the Collectivité, to safeguard an exposed population. But St. Martin must also be able to benefit from a PPRN taking into account the reality of the territory. The main objective of this collective work is to reduce the vulnerability of the territory and therefore, in the future, to allow the realisation of projects, both public and private, in optimal safety conditions.”

Gibbs gave assurance that the opinion of citizens will not only be listened to but, above all, taken into account.

“I have asked that the documents provided to the population be as clear as possible, accessible, pragmatic, free of overly technical aspects, and translated into English as a minimum. All the public meetings will be carried out on this basis, with communication on all fronts.

“After all the ups and downs that this document has generated in our territory, it is now time to finalise the PPRN and allow each St. Martiner, each investor, to carry out their projects in complete safety and with respect for our island, its cultural identity and its historical heritage.”

The final document should be presented and approved during August 2021.