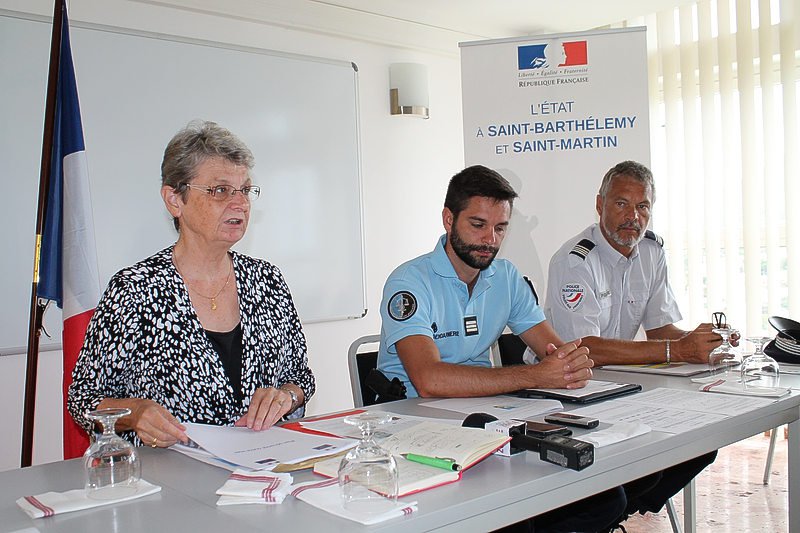 MARIGOT–Préfète Anne Laubies revealed Wednesday a communication campaign will shortly be launched to recruit reservists, whose experience can assist the Gendarmerie and Police in matters of security.

She was referring to a national initiative called the “Réserve Opérationelle” which she said is little subscribed to and needs a boost.

Typically, these persons would be retired Gendarmes, Police or ex-military persons, or others who feel they can contribute. Depending on their skills, they can work in a number of different fields, not only criminal investigations, but civil security and assist in times of hurricanes or other natural disasters.

“Security affects each one of us and security involves the participation of everyone,” she said. “But we can’t work alone. Regional cooperation, working with our colleagues on the Dutch side and Anguilla, has never been more important. It must be developed more.”

Being a reservist is a paid job, one has to be of French nationality, over 17 years of age, completed national service, be in good health, and have no prior convictions. A training will be provided in Guadeloupe. More information about admission can be obtained from the Gendarmerie in Concordia or French Quarter.

Préfète Laubies was talking at a press conference on security and was joined by Gendarmerie Deputy Commandant Emmanuel Maignan and Commandant of Police aux Frontières (PAF) Jean-Luc Deras.

While it was expected that the Préfète would disclose the Security Plan for the overseas territories, formulated by Interior Minister Berard Cazeneuve and Overseas Minister George Pau-Langevin on June 29 in relation to the extended emergency measures for security in France, this was not elaborated on.

Instead, the plan was presented to the press in the form of 22 security recommendations that Préfectures in the overseas territories can adopt according to the needs of their own territories.

Laubies did not indicate any new measures within that plan would be adopted in St. Martin other than the current increase of controls throughout the territory and at both airports, along with the extra powers accorded to law enforcement since the start of terrorist attacks in France.

The press conference was also an opportunity to present the latest crime statistics.

Capitaine Emmanuel Maignan said the good news is that the French side has seen a marked reduction in crime in the last three years, calling the development “very encouraging,” and resembling statistics from the 1990s.

Préfète Laubies said she could understand how the recent homicides leave the population feeling insecure and anxious, but that should not overshadow what the true figures show, and that the work of the Gendarmerie is clearly effective.

Capitaine Maignan attributed the improved results to the 14 extra mobile Gendarmes assigned to St. Martin by President Francois Hollande in 2015, the increased presence of Gendarmes throughout the territory, increased controls, and new initiatives. The Gendarmerie also went through a reorganisation, it now has more detectives working on cases, there’s a higher rate of solving cases, and the justice system has played its part by meting out stiffer sentences to offenders.

The Gendarmerie has a force of 88 Gendarmes including the mobile brigades that change every three months. But with all services combined and that of Guadeloupe assistance the number rises to 200. St. Barths has 21 Gendarmes and personnel.

PAF Commandant Jean-Luc Deras noted 273 persons were arrested for residing illegally in the territory since the start of the year compared to 241 in 2015 for the same period.

24 procedures were issued for false documents compared to 13 in 2015. 92 persons were escorted to the border.

Asked about organising another weapons amnesty, results from which in the past have been very poor, Laubies said this would most likely be restarted after the Dutch-side political elections.

“There would no point in doing it without the Dutch side,” she added.

Source: Daily Herald
Préfète appeals for reservists to assist with security of island