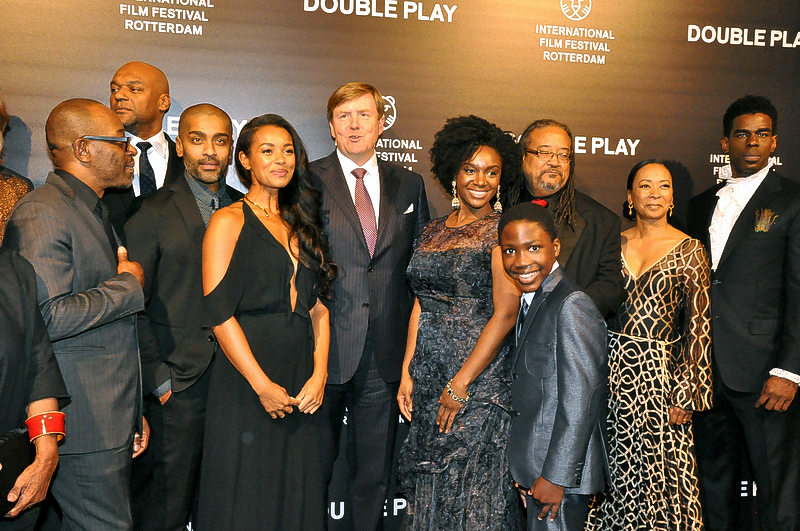 ROTTERDAM–“With this movie I tried to establish my love for Curaçao. I hope I did justice to the novel of Frank Martinus Arion,” said Director Ernest Dickerson on the stage after the world premiere of Double Play at the International Film Festival Rotterdam (IFFR) on Friday evening.

Double Play, the much anticipated movie shot entirely in Curaçao, was very well received by the some 800 guests, including King Willem-Alexander of the Netherlands and Trudi Martinus-Guda, the wife of the deceased author of the 1973 famous novel “Dubbelspel” (Double Play).

The movie received a tremendous applause and a standing ovation, and the audience, many of whom hailed from Curaçao, agreed that this was a very special movie about their island which brought back memories with a story and scenes that they very much recognised.

Upon his arrival at the world premiere, the King addressed the media that had gathered outside the Old Luxor Theatre in Rotterdam. “I love movies and I think the Rotterdam Film Festival is fantastic. But the best part about this premiere is that it shows the connection between the Dutch Caribbean, especially Curaçao, and the Netherlands. It confirms the support for the people from Curaçao and the Caribbean living in Rotterdam,” said the King.

The King was met at the entrance by IFFR Directors Janneke Staarink and Bero Beyer, and Double Play Producers Lisa Cortes and Gregory Elias. “All premieres are special, but this one is extra special. Not only because the King is in attendance, but also because this movie connects the continents, the Netherlands and the Dutch Caribbean,” Beyer told the media.

The newly appointed Curaçao Minister Plenipotentiary Eunice Eisden said before the showing that she was “deeply moved” that a Curaçao novel had been turned into a movie. “That attention is very important. It shows that culture, arts, but also sports connects people,” she said.

Actor Alexander Karim, who plays one of the main characters Bubu Fiel, said that Curaçao has captured his heart. “Before we shot this movie I had never been in Curaçao. I will surely return, because it has become my second home,” said Karim, who originates from Sweden.

For Director Dickerson, who hails from the United States and worked as a former cameraman of Spike Lee and was the director of TV series such as The Wire, The Walking Dead and Dexter, Curaçao had already become his second home.

Dickerson has been a frequent visitor to the island since the 1980s when he worked as the cinematographer for the movies “Desiree,” and “Almacita di desolato” of Curaçao Director Felix de Rooy. In Double Play Production designer De Rooy assisted Dickerson in reconstructing Curaçao in a past time.

There was much praise for Double Play’s youngest actor Dani Dare from the US. The 11-year-old Dani plays the young Ostrik, the son of Bubu Fiel, in 1973. “He is the real star of this movie,” said director/politician John Leerdam, who assisted in organizing Friday’s premiere. Leerdam has in the past made a theatre production of the novel Double Play. “We are so happy that we now have a movie of this magnitude ten years after the theatre play. This is a full circle,” said Leerdam.

The movie Double Play is set in two years, 1973 and 2010, the year that the now grown-up Ostrik returns to Curaçao from the Netherlands where he works as a doctor. Set around a daylong game of dominoes in 1973 played between Ostrik’s father Bubu and three friends Manchi Sanantonio, Chamon Nicolas from Saba and Janchi Pau, Ostrik recalls the events that dramatically shaped his formative years.

Over the course of a game of dominoes that lasts an entire day, the fates of four men are revealed through a journey of love, loss and deadly betrayal, while political, social and sexual rivalries are provoked.

It seems a story of men, but ultimately it is about the female characters who play the strongest roles with Melanie Liburd as “Solena,” the wife of “Manchi” played by Mustafa Shakir, Saycon Sengbloh as “Nora,” the wife of Bubu Fiel and Barbara Eve Harris as Ostrik’s sister.

Double Play will go onto premiere in Curaçao in early March and will be shown in Dutch movie theatres in May. The IFFR has three showings, all sold out.