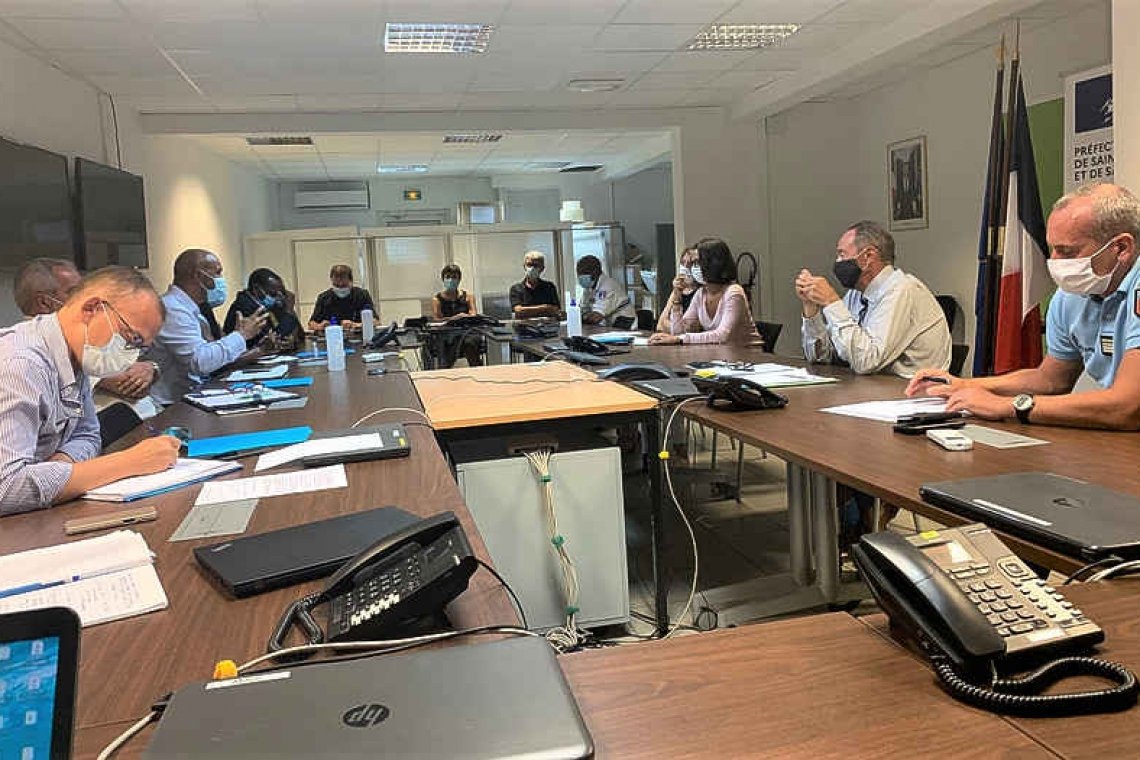 Meeting in progress between Collectivité elected officials and Sous-Préfet Mickaël Dore on Tuesday.

MARIGOT–President Daniel Gibbs, accompanied by Vice-Presidents Valérie Damaseau and Steven Patrick, raised his concerns at a meeting in the Préfecture on Tuesday over the extension of border controls and the negative consequences it is having on the business community.

It is not the first time the President has sounded the alarm, and he joins the respective Chambers of Commerce, among others, that recently voiced their objections to the border closures.

Also present at the meeting with Sous-Préfet and General-Secretary of the Préfecture Mickaël Dore were Director of the Louis-Constant Fleming Hospital Marie Lampis, Regional Health Agency ARS representative Pascal Godefroy and Commandant of the Gendarmerie, Stéphan Basso.

First and foremost, the President informed the State representative of the situation regarding students attending schools on the French side who are currently blocked because they live on the Dutch side. The President asked the Secretary-General to study the situation of St. Martin families who are requesting access to schools for their children. The Secretary-General undertook to address these situations on a case-by-case basis.

On the economic aspect, the President reminded everyone that this bi-national island territory, unlike other islands of the French West Indies, relies 90 per cent on tourism. The President asked the State to take into consideration the situation of the socio-professionals and their employees, whose difficulties have increased since the implementation of border controls between the north and south of the island.

The President asked that a date for the re-opening of the border be communicated to them as soon as possible so that they can envisage the coming season and bookings can be made.

In the medium term, the President made the Secretary-General aware of the economic situation of Sint Maarten and the importance of projecting a wider re-opening of the destination for the next tourist season.

President Gibbs also indicated that in anticipation of the next season, the Collectivité will study the possibility of requesting an exemption from the State to welcome US visitors on its soil, in the same way that Saint-Barthélemy benefits from this exemption. This exemption is based on the condition that a precise health protocol will be established, to which the socio-professionals of the territory will have to contribute and fully adhere to.

Concerned about the recent deterioration in the health situation and aware of the need to protect the inhabitants, the executives of the Collectivité are seeking appropriate socio-economic solutions to enable St. Martin to recover from this unprecedented health crisis, while continuing to raise public awareness to prevent spread of coronavirus COVID-19.

With this in mind, the elected representatives have called for reinforcement of field controls. They agreed that the territorial police should join forces with the Gendarmerie to step up prevention and controls, particularly in bars and leisure establishments. The aim is to limit gatherings and to ensure that instructions on social distancing are respected.

President Gibbs and his executive again called for joint health protocols to be put in place as soon as possible between the French State and the government of Sint Maarten, the only authorities competent in terms of health and border management, to enable the borders to be re-opened and for the island to resume normal operations.

“This is the condition that will enable us to save the St. Martin economy with the least possible difficulty while jointly combating the spread of the virus. It is becoming urgent to take this decisive step and to work on an island-wide scale,” Gibbs concluded.

The Préfecture undertook to study the proposals put forward by the Collectivité and its elected representatives.