Home Headlines & Top Stories President Gibbs: ‘Cooperation should not be an empty word’ | THE DAILY... 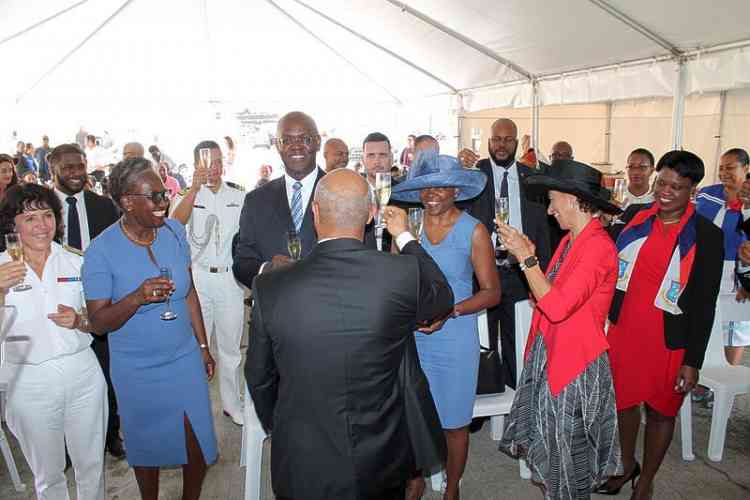 MARIGOT–The official St. Martin Day ceremonies were held in French Quarter on Sunday and as expected speeches revolved around unity, friendship and cooperation.

The ceremonies were brought forward this year due to the event falling on a Sunday, which meant the clergy had to be in their churches by 8:00am.

President of the Collectivité Daniel Gibbs in his address reminded the population of Saint Martin of Tours, whose name Christopher Columbus chose to take, in naming the island on his discovery in 1493.

“In the current situation, these humanitarian values resonate more than ever in our minds and echo the difficulties faced by many of our fellow citizens.

“Sealed by the Treaty of Concordia in 1648, two centuries after the island’s discovery, the unity between our two nations has never waned,” he emphasised. “Our family, business and political ties have grown stronger over time and this year we are celebrating the 370th anniversary of our Treaty of Concordia.

“For me, that means a lot. This treaty, nearly 400 years old, reminds all those who still doubt it that we are a people of openness, a land of welcome. Our bi-national island has effectively created a unity of peoples and cultures that continues to this day.

“This unique example from around the world is the pride of St. Martin people and our Friendly Island. Our common history is the foundation of our unity. I invite everyone to immerse themselves in it, to play their role as a conduit of memories for the younger generations.

“We must more than ever preserve this wealth; we must carry the values of sharing and fraternity that have built us as a St. Martin people. Breaking this harmony would be a danger to our future balance. And I warn all those who sometimes play this dangerous game for political purpose”.

He continued: “Our duties as elected representatives are to pursue and strengthen North-South cooperation. Our relationship is already very fruitful, and I look forward to it, but you know my determination to see our United French-Dutch Congress become a reality. I have been calling for this for several years now, because this joint Parliament would provide a solid legal framework for our cross-border actions.

“Cooperation must not be an empty word. It must be translated into action and mutual support. We welcome the relaunch of cooperation on projects financed by European funds. We have at our disposal a budget of 10 million euros for cross-border cooperation, but we need to speed up the appraisal of projects, particularly actions to clean up the lagoon, which have now become urgent and a priority.”

Gibbs added that French Quarter, which was hosting most of the festivities, is at the heart of territorial priorities.

“This district and Sandy Ground are priority districts in the Contrat de Ville and an action programme to improve the living conditions of the inhabitants has been implemented for the next five years. The creation of Maison des Services Au Public (MSAP), located a few metres away and inaugurated last September, is an example of the commitment of our Collectivité and its institutional partners to our French Quarter residents.”

He paid tribute to all those who have helped to rebuild the island in the last year.

“Because I am convinced that no fight can be won alone. It is together and above all by ourselves that we will write this new page of our history; with the human and financial resources at our disposal, with our patience and will, with our common conviction that St. Martin has an extraordinary potential and that our island will be reborn more beautiful and stronger than ever.”

Prime Minister of Sint Maarten Leona Romeo-Marlin in her address said she was pleased with the current trajectory of cooperation between both governments, calling it “real and tangible.”

“Together with Préfète Sylvie Feucher and President Daniel Gibbs the resolution of any issue or concern is just a phone call away. This approach of open communication between both sides has yielded positive results throughout my 11 months in office.  There is also cooperation on the promotion, marketing, and product development of our tourism industry, insuring that both economies bounce back after the passing of Hurricane Irma.

“The freedom to drive from side to side allows each of us the opportunity to enjoy the natural beauty and culture of the island. Therefore, our differences are far less than the things we share in common.

“Our commonalities begin with shared bloodlines that not only flow through our veins but also across borders and strengthen the bonds of our shared culture and heritage. We must re-commit to ensure that unity, friendship, family we hold so dearly is preserved in honour of our ancestors for an additional 370 years.”

In a typically rousing speech, full of the patriotic fervour she is known for, Chair Lady of the Dutch-side Parliament Sarah Wescot-Williams, congratulated both governments for “picking up the slack” in re-affirming unity on the island.

She disclosed, to applause from the audience, since holding political office she has attended St. Martin Day every year for the past 27 years, recalling that sometimes she was the only Dutch-side representative present.

“The agreement on unity wasn’t done by us, but it put an end to wars waged on and over our island,” she said. “Then we took it upon ourselves to continue that unity. Sometimes there has even been doubt over whether to celebrate St. Martin Day or not.

“The St. Martin Day celebration has been questioned about its significance or relevance many times. It’s easy to celebrate it when everything is easy, but the true test of character and resilience is when we face adversity. If we don’t tell the story, we can’t blame those who are questioning what it is, or what it’s about, its history.

“How can we look for strength where we don’t recognise our own roots? Let’s make sure we get the story straight. And I believe with the right demeanour, the right conviction, no one can separate St. Martin and Sint Maarten.”

Claire Guion-Firmin in her remarks praised the strength French Quarter residents have shown for over a year and encouraged the population of this district and the entire island to show patience, perseverance and courage.

“It is with deep respect that I congratulate the volunteers in the associations of French Quarter who give their time, energy and passion to restore life in the district. Taking care of the elderly, the vulnerable, the youth, participating in cleaning campaigns, this is the spirit of solidarity that brings out the richness of the St. Martin identity.”

The dignitaries of both governments participated in the traditional champagne toast after the speeches, before watching the St. Martin Day parade outside the stadium.

The large parade included battalions of Gendarmes, Territorial Police, Dutch-side police, VKS, numerous divisions of scouts and guides from both sides of the island, and the SXM Majorettes.