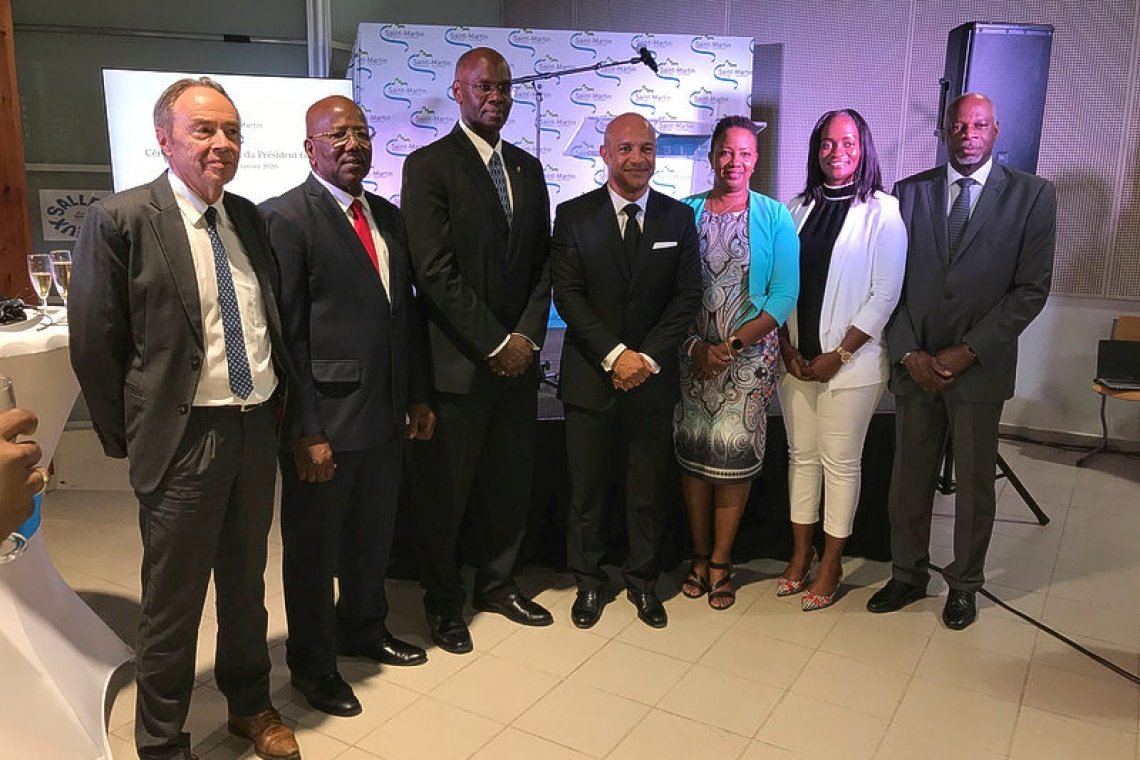 MARIGOT–President Daniel Gibbs delivered his New Year wishes on Friday to the assembled representatives of the Collectivité’s main institutions, associations and business professionals during a cocktail reception in the refectory of Collège Mont des Accords and the Lycée. The location was chosen for the significance of the Lycée’s recent earthquake-proofing rehab to the tune of 3.8 million euros.

The Préfecture was represented by Secretary General Michaël Dore, in the absence of Préfète Déléguée Sylvie Feucher. He was joined by Dutch-side guests of honour, Governor Eugene Holiday, Prime Minister Silveria Jacobs and President of Parliament William Marlin.

Given the protests in December against the natural risk prevention plan PPRN and the whole gamut of long-standing social issues, it was not surprising that Gibbs declared 2020 the year for social cohesion.

“St. Martin must have a real social policy because expectations are increasingly high. Social peace in St. Martin now hangs by a thread,” he admitted. “Firstly, there is the absolute necessity for the State to thoroughly correct the PPRN regulations, to create solutions for the future of our fellow citizens living on the coast, but also to offer our territory equal opportunities, in terms of the development of infrastructures on the seaside.

“Our regional environment is our competition, and it is up to us to take our rightful place in it. Secondly, there is an urgent need for the community to put in place social cohesion measures in the heart of priority neighbourhoods.”

On this, concrete actions have already been undertaken including the organisation of the first social conference, February 18-21 “Assises du Social et de l’Insertion de St. Martin”, by involving all the inhabitants directly, in the four districts. The drafting of the social white paper will also include a set of measures to be deployed over the second part of the mandate in favour of the neighbourhoods.

In his lengthy speech, Gibbs discussed on different topics the Collectivité’s major actions, the challenges it faces and its aspirations. One of these was the restrictive rules on public procurement that slowed down launching projects in 2019, inadequacy of the services and constant controls. He said, “St. Martin is one of the most controlled communities in France.

“Complying with all the requirements leads to administrative slowness in the daily execution and the legitimate impatience of our citizens, who do not understand why some projects are slow to see the light of day, is completely understood. At present, several projects are blocked at the public order. However, these projects have been arbitrated and financed for several months. But they are not coming out for various technical reasons. These are the reasons why the Collectivité is not moving at a normal pace after [Hurricane – Ed.] Irma.”

He explained that this is the reason why Director General of Services (DGS) Christiane Ayache and her team have been tasked with reorganising administrative services.

The Multi-Year Investment Plan, he said, provides 240 million euros over the next four years, going directly into the economy to support: the most fragile sector of the population, economic development and the success of St. Martiners; and is reflected in the 2020 budget by  completion of reconstruction of school facilities, rehabilitation of public facilities and resilience of public networks. In terms of development, it addresses redeveloping public spaces in tourist areas, improvement of infrastructures for the benefit of inhabitants and professionals, and more efficient waste management.

He said St. Martin needs “a strong, responsible and prosperous private sector” and assured business leaders that they have the support of the Collectivité which is working to restore public lighting, improving the state of the roads and embellishing shopping centres. He added he is aware that more dialogue is needed to explain what is going on.

Gibbs acknowledged that businesses suffered the consequences of the social unrest and protests in December. Businesses were invited to take part in a survey to estimate their losses.

“I will convene a meeting of my departments to define the terms of our fiscal, financial or legal support to the economic sectors most affected. In addition to these exceptional measures, we will be working on two trade safeguard measures in the coming months. Firstly, we will insert in the town planning code the possibility for the Collectivité to pre-empt business and commercial leases. We will thus have a better monitoring of transactions in commercial areas and the possibility to intervene through the right of pre-emption, if necessary.”

He stressed that responsibility for revitalisation of Marigot is shared and called on owners of derelict commercial areas to take their responsibility and participate.

“The responsibility for revitalising the town centre is shared. Thus, owners of derelict retail spaces must take responsibility and also participate in the revitalisation of commercial activity. Consideration is being given to the introduction of strong incentives. I know that I can also count on the renewed partnership that we have enjoyed in recent months with the BPI, Atout France and the Caisse des Dépôts et Consignations to support us collectively, in our achievements.

“An entertainment policy, alongside shopkeepers, is a fundamental factor in the frequentation of the town centre, particularly by tourists. The 2020 budget will propose additional budget appropriations for commercial entertainment, in addition to a strengthened partnership with the traders’ associations.”

On tourism he disclosed he would put to vote an increase in the allocation to promote the territory by the Tourism Office, at the Territorial Council meeting on February 28. This budget and the territory’s new branding expected at the end of the year with Atout France will improve St. Martin’s image in the foreign markets.

“I am also pleased to announce that last Wednesday the Executive Council authorised me to sign the ‘France Tourisme Ingénierie’ agreement with Atout France and the Banque des Territoires, in order to advance structuring projects for St. Martin including the creation of a Hôtel-École, in order to train our young people in tourism-related professions of excellence.”

On the fisheries and agriculture sectors he reminded that the Executive Council at the end of 2019 had voted to set up a scheme to assist in the acquisition of new vessels for the fishermen of St. Martin, whereby the Collectivité and the State would contribute toward 60 per cent of the cost.

“This is a major step forward in modernising your production facilities and improving your working conditions. We look forward to the publication of the call for projects by the State services for the creation of the fisheries committee. The Collectivité will, of course, respond favourably for a fisheries committee in St. Martin.”

Addressing his Dutch-side counterparts directly, Gibbs said cooperation in development activities is of utmost importance as “development of one cannot be achieved without the other.”

“Our cross-border projects, supported by the European ERDF-CTE 2014-2020 programme are, at last, well under way. They are important for the living environment of all the island’s inhabitants. Furthermore, we remain fully mobilised on the need to create an official joint body: United Congress of St. Maarten/St. Martin for decision-making affecting both our territories.

“This is essential, in my view, because we see every day the legal vacuum when it comes to making progress on common concerns: such as natural disasters, health issues, education etcetera.”

Dignitaries toasted the New Year with a glass of champagne at the conclusion of Gibbs’ speech.