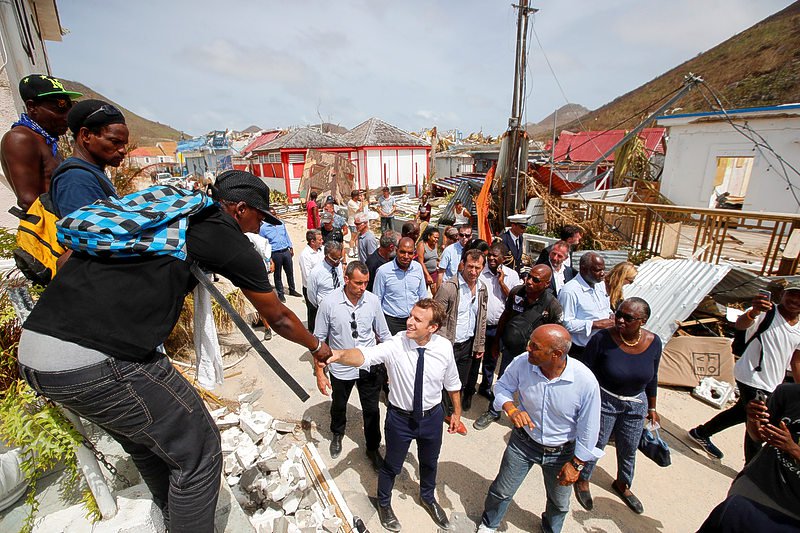 MARIGOT—President of the French Republic Emmanuel Macron has seen first-hand the extensive damage inflicted to the French side of the island as he flew over the territory in a helicopter on Tuesday.

The Communications Department confirmed his arrival for Tuesday by way of Guadeloupe and by military helicopter to St. Martin. It was not known if he gave a press conference and there was only vague information given to reporters who waited for hours awaiting his reaction at the Galis Bay Port where he was reportedly in a meeting. Some reporters could not wait any longer. The President did make a statement on the crisis in Guadeloupe before arrival in St. Martin.
Meanwhile Marigot was choked with traffic in the morning, partly due to a report that the Blue Point gas station in Galis Bay was open for gas causing the back road of Galis Bay to be blocked by cars queueing up for gas making the road practically impassable.
The Collectivité noted food and water distribution is progressing satisfactorily each day. The main official distribution points are in French Quarter at the Gendarmerie, outside the West Indies Mall in Marigot and in Hope Estate at the new mall. Distributions takes place every morning from 9:00am. The districts are also visited every day.
In two or three days, the French army will be distributing building supplies for people to start rebuilding their homes or businesses.
Outside the West Indies Mall on Tuesday the “pompiers” were seen handing out six packs of 1.5 litre bottles to the population (one six pack per person) from a container. The lines were long but the distribution went fast and it was orderly. Later a food distribution took place in the same area.
The clean-up is progressing slowly in all areas, the Collectivité added. Electricity is already being restored in some areas. The damaged water plant (UCDEM) has indicated it is restarting its water distribution little by little. It will start with 700 cubic metres and by three weeks increase to 3,700 cubic metres. The reservoir tanks hold only two day’s supply for the population.
Contingency plans with aid from the State are being put into place to help businesses that want to restart. Employees will also be able to apply for immediate unemployment benefit (chomage technique).
Inhabitants who want to leave the territory can register at Cité Scolaire or at Hotel de La Collectivité. The lists will be given to the State which will arrange flights to Guadeloupe from where they can go on to a final destination. Persons who were sick, injured, the elderly or vulnerable have already been evacuated on humanitarian flights.