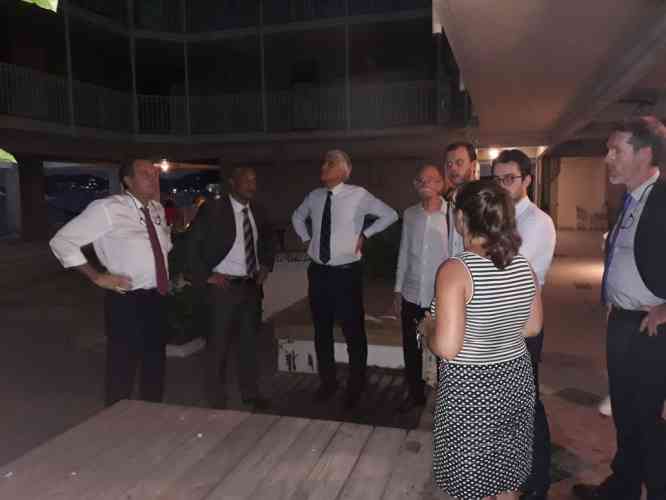 MARIGOT–Lobbying Parliament to implement new legislation to better manage crisis situations such as those caused by recent hurricanes by simplifying or allowing exemption of certain rules was an objective disclosed by a delegation of Presidents from the Regions of France who were on a short visit to St. Martin this week.

The Collectivité of St. Martin has been asked to join the Presidents in giving input seeing as St. Martin has first-hand experience of coping with the consequences of two devastating hurricanes 22 years apart. It is expected the project will be ready to propose to Parliament by the end of this year or in early 2019.

It was the first visit to the French Antilles by the delegation of Presidents who were in Martinique earlier. The purpose of the visit to St. Martin was partly to offer moral support and assistance and to view the reconstruction progress and learn of the challenges the territory faces.

The group was welcomed by President Daniel Gibbs in Hotel de la Collectivité. Gibbs told the group that Paris tends to forget that the Collectivité of St. Martin, since the change of status in 2007, has inherited the competences of the State, Commune, Departments and Regions and along with St. Barths and Saint-Pierre et Miquelon is one of the smallest regions in France.

Gibbs noted that around 7,000 persons left the French side of the island in the wake of Hurricane Irma, and one year later some 3,000 have returned. He went on to divulge five essential projects that St. Martin is engaged in: professional training for young people, relaunching sustainable quality tourism, accelerating reconstruction of school establishments, creating new economic development, and seeking close ties with Europe for management of European funds.

The delegation was given a tour of the French side, visiting Le Beach Hotel in Marigot, and the Lycée in Concordia, among other stops.