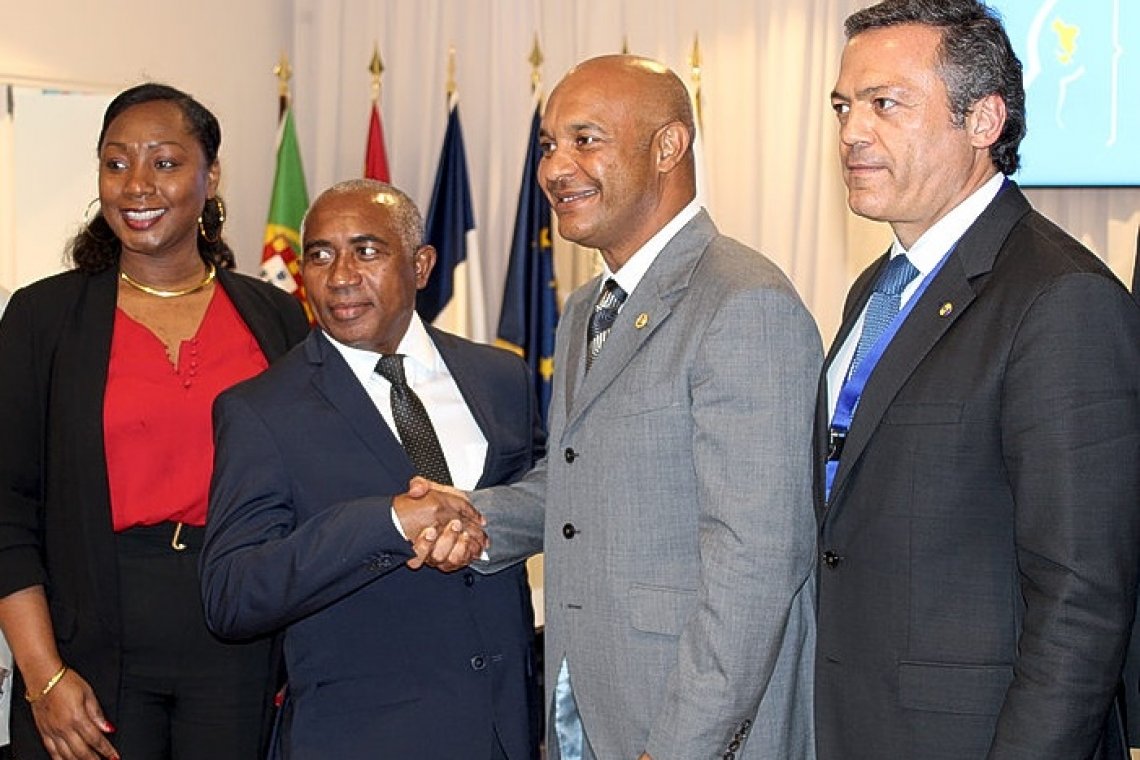 President Daniel Gibbs shakes hands with Vice-President of the Departmental Council of Mayotte, Mohamed Sidi, at the close of the Outermost Regions 24th Conference on Friday, in Belmond La Samanna Hotel. Mayotte will be taking over the Presidency of the conference from St. Martin.

MARIGOT–Presidents of the nine Outermost Regions (ORs) signed the 2020 final declaration at Thursday’s internal session, which reiterates the commitment of the ORs to constructive dialogue in the framework of a strengthened partnership with the European institutions, and recalls the importance of a Europe that creates jobs and social cohesion, refocused on the expectations of its inhabitants and on its fundamental values.

“The ORs must also fight to maintain the historic co-financing rate of 85 per cent, which risks being reduced to 70 per cent. Far too many local beneficiaries, both public and private, would not be able to co-finance projects up to 30 per cent,” Gibbs said, expressing concern.

He opened the session with a unifying speech, recalling “the urgent need to continue working together to defend the interests of our regions. Because, in the current political context, especially in France, no one will do it for us,” he stressed. “We are, at the same time, worried, united and determined.”

During this session, the presidents exchanged views on the challenges ahead and reaffirmed their willingness to work together to safeguard the interests of the nine territories. Among the major challenges of the St. Martin presidency are areas that were the subject of in-depth work at the Presidents Conference in 2019.

They include: monitoring the implementation of the OR Communication presented by the Commission in October 2017; defending the status of the outermost regions, particularly in the context of the negotiations on the new post-2020 programming period; analysis of the acquisition of legal status for the Conference; pursuit of joint activities between the ORs and partnership sessions with the European Commission in areas of common interest; and external visibility of the Conference.

The St. Martin Presidency has been responsible throughout its almost 15-month term of office, for managing the Conference’s website, initially set up by the Canary Islands Presidency (2017-2018). The site was regularly updated and made it possible to disseminate to the public all the activities carried out by the Conference or its regions.

Furthermore, again with a view to increasing the visibility of the ORs, in May 2019 the Monitoring Committee met the liaison unit of the European Parliament’s research service. In the context of the liaison office’s tasks, which focus on setting up information and communication activities aimed at regional and local players and improving cooperation with public authorities, this cooperation is a means of contributing to the development and implementation of European policies.

The primary objective of the Collectivité for the post-2020 programming of the Structural Funds remains to obtain its own Operational Programmes (OPs) containing credits commensurate with the real needs of the territory, including in terms of regional cooperation.

The presidents will be mobilised to defend the differentiated legal status of the Outermost Regions at the forthcoming “Conference on the Future of Europe”, by establishing broad lines that will guide the future of the Outermost Regions within the European Union, and have demonstrated their willingness to contribute actively to work to be undertaken to ensure that the reality of the regions is not overlooked in the definition of the common future.