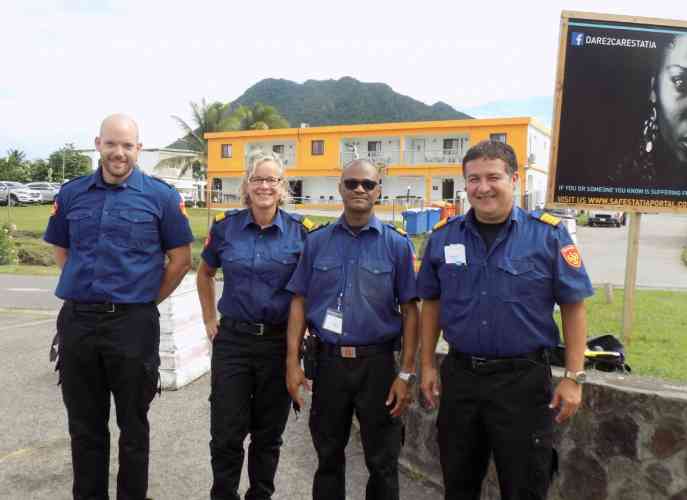 ST. EUSTATIUS–Fire Department Chief for Bonaire, St. Eustatius and Saba Jair Tromp visited the Fire Department in Statia last week in the company of two of his colleagues Vincent Jansen and Esther Piet.

Piet previously was a firefighter in the Netherlands and then made a shift to education. She moved to Bonaire this year and applied for a vacancy at the Fire Department. She will give training in fire protection in the Caribbean Netherlands.

“That is why it is important for me to take my colleagues to see Saba and Statia, and to let the islands see that we not only operate in and for Bonaire, but for all three islands,” Tromp said.

This month, the Fire Department will be starting a new recruitment drive. The last drive, which was held in 2017, yielded one new firefighter.

Tromp said Statia is “way ahead” of the two other islands of the Caribbean Netherlands when it comes to having more female firefighters.

“The Fire Department sees the importance of having female firefighters in Bonaire,” said Tromp.

The Fire Department will organize an information campaign and Tromp said he hoped that many persons will apply for the available positions.

Candidates need to have a degree at VMBO level, but candidates with an MBO degree are especially encouraged to apply.