Home Local News Price rise on Bonaire and Saba higher than on Statia | THE... 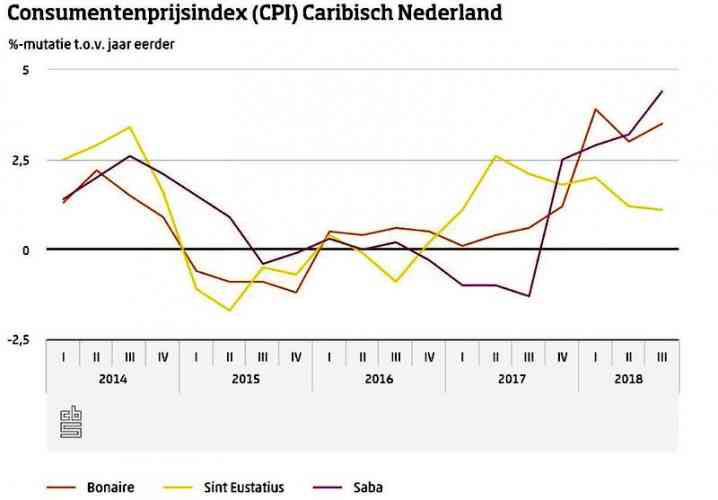 SABA/ST. EUSTATIUS–In the third quarter of 2018, consumer prices on Saba increased by 4.4 per cent and on Bonaire by 3.5 per cent compared to last year. Prices also rose on St. Eustatius by 1.1 per cent, it was reported by Central Bureau for Statistics (CBS) on the basis of the Consumer Price Index (CPI).

In particular, food products and toiletries became more expensive. In addition, the price of electricity also rose on Saba by more than10 per cent year-on-year. Clothing items, on the other hand, went down in price.

In the third quarter of this year, consumer prices on Statia increased by 1.1 per cent year-on-year, against 1.2 per cent in the second quarter of 2018.

The lower prices of food products in particular, for example fresh fruit and potatoes, diluted the effect of the consumer-price increase. On the other hand, the price development of electricity had an upward effect on Statia’s price level as well, CBS said Wednesday.

The price of gasoline went up by nearly 17 per cent on an annual basis, CBS stated. Not all prices went up in Bonaire. For example, fresh fruit and fresh vegetables became cheaper than one year ago.