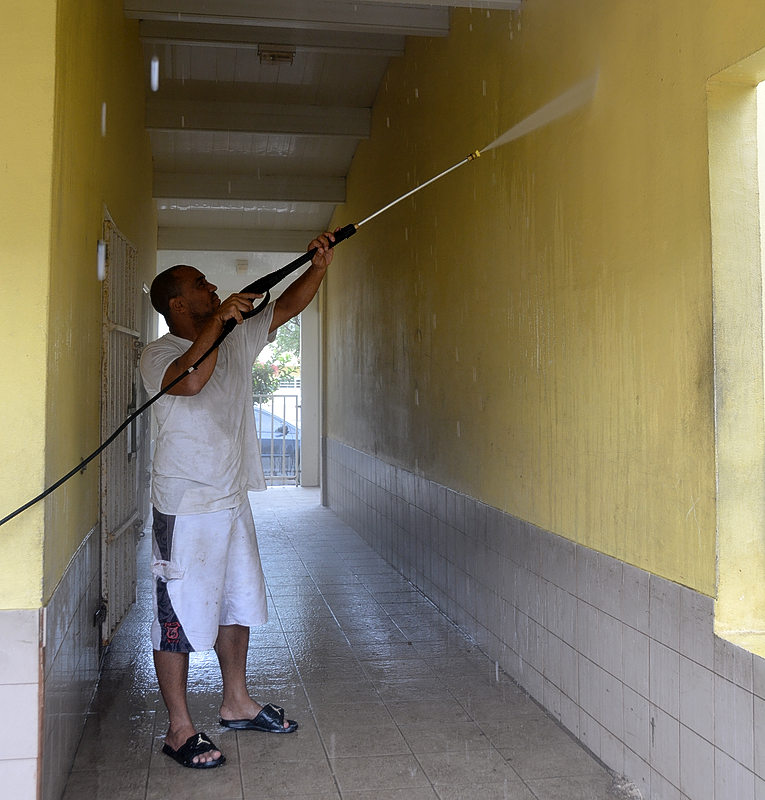 PHILIPSBURG–Minister of Education Silveria Jacobs made good on her promise by following up with the recommendations made by teachers of Leonald Conner School in Cay Bay by power-washing the school on Wednesday. School will remain closed on Thursday, according to Jacobs.

Leonald Conner School teachers and parents of pupils were updated by the Ministry of Education, Culture, Youth and Sports on steps taken since the report of gases at the school on October 19, and were informed about the plans moving forward.

After the presentation, parents took the opportunity to ask questions, make statements and suggestions. Ministry Inspectorate and Fire Department representatives were on hand to answer the questions from the audience.

Several concerns were raised about Government’s ability to regulate the industries that are affecting the Cole Bay/Cay Bay area. Minister Jacobs and the various inspectors reiterated Government’s commitment to finding solutions to the challenges being faced.

The Minister had suggested restarting school today, Thursday, as the cleaning of interior was reportedly almost complete. However, on insistence of the teachers she agreed to allow one more day to finalise cleaning of Cycle 2 classrooms and the exterior.

GEBE has been conducting tests in the area and will update the Ministries when the tests are concluded. The Daily Herald contacted GEBE Chief Executive Officer Kenrick Chittick on Tuesday, but to date he has not answered several questions pertaining to GEBE’s involvement. The plans outlined by Jacobs include cleaning of the school to remove the fine dust.

An electrical upgrade is necessary to carry the load of new air-conditioning units that will be installed. Emissions were measured in classrooms currently equipped with air-conditioning units. Further investigations as to the make-up of gases in the environment will be performed by professionals. Masks to filter the air will be made available to all. Quotations have been requested and information was sought from VSA as to the right type needed for gases.