Home Local News Prime Minister calls for both sides of island to be involved for... 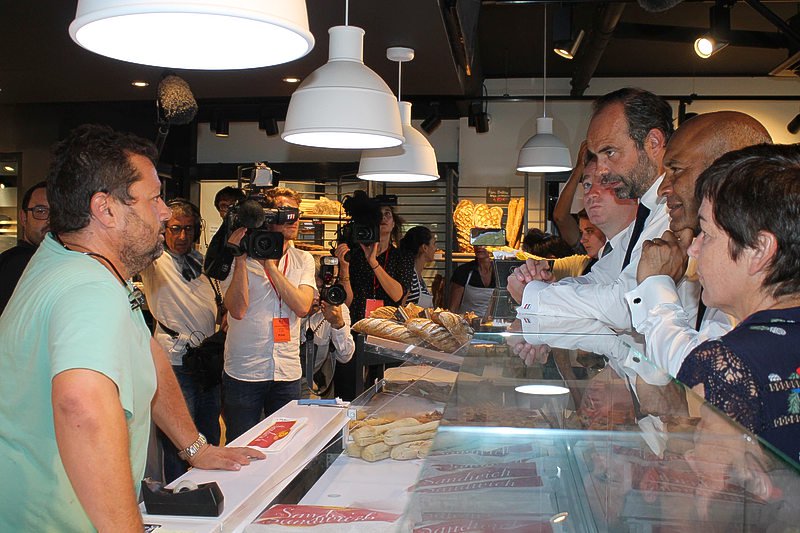 MARIGOT–French Prime Minister Édouard Philippe in his parting speech before leaving St. Martin yesterday called for closer coordination and involvement between the two sides of the island to guarantee “balanced” development of infrastructure with projects that can benefit both territories, something that is “absolutely strategic” to reconstruction, he said.

He noted that there has been close contact with the Netherlands since the passing of Hurricane Irma and that a member of the Netherlands government is on the Inter-Ministerial Commission for the Reconstruction of St. Martin, adding that it was important to be fully integrated with the person in charge of the reconstruction of St. Martin, Préfet Philippe Gustin.
He said a member of the French Government will come to St. Martin every two months to verify everything is proceeding satisfactorily and being executed as per discussions held previously.
Philippe announced as an immediate interim measure pre-paid cards to a value of 300 to 900 euros will be given to those people who are suffering the most after the hurricanes, the destitute with no income. The amount depends on how many children the family has. A child gets 100 euros. The cards, a one-time issue, can only be spent on the French side.
He also made clear that the Collectivité will be refunded the land tax, some nine million euros, which was a proposal announced previously by President Daniel Gibbs: to temporarily waive this tax to help citizens in the aftermath of the hurricanes. Businesses will also be exempt from paying social charges until November 2018.
Philippe said reconstruction will involve a strong partnership between the State and Collectivité. For control on spending and transparency, and issuing building permits, the resources of the State Services and Prefecture will be reinforced for management of Service Urbanisme and the Control de Legalité.
“Partnership between the State and Collectivité is essential for the future of St. Martin,” he said.
With regard to the military deployment in the aftermath of the hurricanes, he said he had “no regrets” about the considerable sum of money spent, noting, “It was necessary and our duty.”
Philippe said his large delegation, including the Education and Sports Ministers, was reflective of the French Government’s taking responsibility and willingness to provide aid to St. Martin. While there was assurance that significant funding will come from the State and Europe, there was no mention of any plan for reconstruction of sports facilities, despite the presence of Sports Minister Laura Flessel.
The delegation began the day early with a visit to Clair St. Maximin School in French Quarter. Monday was the first day back at school after the Toussaint holiday. Apparently 90 per cent of teachers were present.
“Return to school under these circumstances is not normal for teachers or pupils,” Philippe told reporters. “But they are making the best of the conditions. The essentials are there.”
He also met members of the Red Cross and associated agencies, young members of the Adapted Military Regiment of Guadeloupe (RSMA) who were deployed in St. Martin to help clean up, and members of the Fire Brigade (pompiers).
After observing the destruction of Thelbert Carti Stadium, the delegation, the Ministers, press pool, security staff and minders visited the Gendarmerie in French Quarter where the Philippe chatted with Gendarme Reservists. He commended the Gendarmerie for its diligent investigation work to catch looters and bring them to justice. He confirmed the Gendarmerie will be reinforced to higher levels of manpower than before the hurricanes.
Then it was on to the Hope Estate Industrial zone where Philippe met business owners. The first stop was at L’Express coffee shop in the new Aventura Mall, followed by a visit to one or two boutiques. At one point he was forced onto the defensive when he was confronted by a woman who complained about a number of matters, including the proliferation of flies and mosquitoes.
Asked for his reaction to the Prime Minister’s visit, President Daniel Gibbs said: “I’m satisfied with the concept of Ministers visiting, as you get a certain amount of information and questions answered. I’m not satisfied with everything. There are other areas to be addressed, especially the social part for the people. But there is improvement. There are some positive advancements, as he mentioned, but not necessarily what we were expecting.”
Gibbs said a protocol has been signed for funding to start arriving by the end of the year. The budget needs to be voted by Parliament first.